Burns Night is annually celebrated in Scotland on or around January 25. It commemorates the life of the bard (poet) Robert Burns, who was born on January 25, 1759. The day also celebrates Burns' contribution to Scottish culture. Burns' best known work is "Auld Lang Syne".   To mark the occasion I tatted some Scottish thistles, here is one I wore as a brooch yesterday. 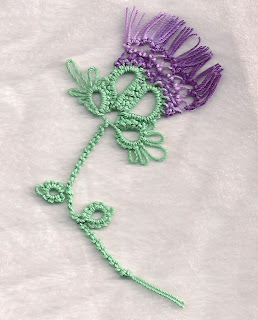 Although I do not live in Scotland, last night I went to a Burns Night celebration in a country house where the host is Scottish.  I tatted 80 thistles to be placed on the table, you can just see one on the right of the picture. 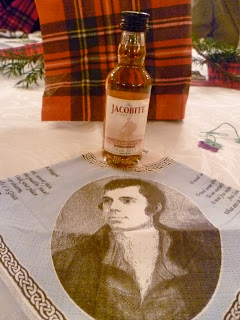 I designed this particular pattern for the thistles myself, it is quick and easy, well it had to be with so many to make!  The picture does not show up the table cloth very well,  but it is pure linen and over 100 years old. 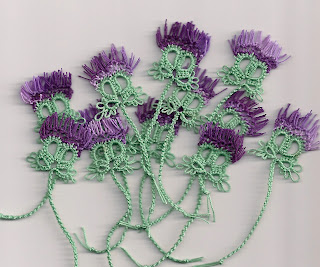 The evening was great fun with the traditional  haggis accompanied by neeps (swedes or turnips ) and tatties (potatoes).  This is when  potatoes sound very much like tatting! 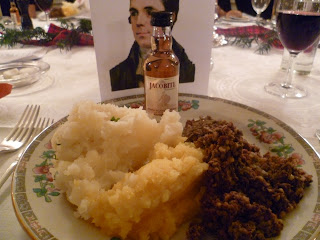 A haggis is a very old Scottish dish, which combines meats, spices and oatmeal to create a very rich unusual, but none the less delicious feast!  There are many traditions associated with Burns night, one being toasting the haggis as well as the "lads" and "lassies".  So as you can imagine a fair bit of the hard stuff was consumed.   There was no dancing but we did sing some Scottish songs including "Auld Lang Syne" at the end of the evening.

A book mark which I gave to someone yesterday morning who is Scottish, he helps with the computer group held in our church each Wednesday.

Robbie Burns was truly remembered in style yesterday and I am sure he would have appreciated the celebrations in his honour.

The thistle is made in two parts (green thread and purple thread), with no ends to sew in for either part. Ring one, when looking at the thistle, is the second ring on the left, you go back and work the first ring on the left with the second shuttle (R4)
Materials required: size 20 thread green and size 40 purple

Hint: I used PVA glue to make the head of the thistle stand up straight!