There has been talk of a need for larger bobbin shuttles which will hold more thread.  So I found some sewing machine bobbins which we bought originally to put in the shuttles 'im in the garage made'.  However, in the early stages of making them we discovered that these bobbins made the shuttles rather large.

As an experiment they are going to be used in some pop-a-bobbin shuttles.  So far there is very little difference in size between them and the shuttles that use the Aero bobbins, mainly because the shaping of the shuttles has been finely tuned after years of practise. The ones you see in the picture are far from completed and we are not sure if they are going to work at this stage. 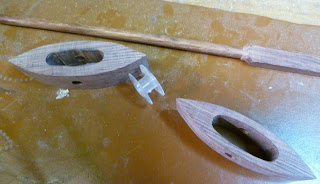 Also lined up in the garage are some standard pop-a-bobbin shuttles in the process of being made, together with some post shuttles.  As you will see there are some interesting woods on the far right including violet rosewood and snake wood.

These will not be in Jane's Etsy shop until next month, as they have a fair way to go before being finished, but thought I would give you a quick peep in the garage!