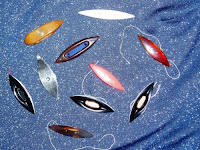 Yesterday I was in one of the local charity shops and I spotted a tatting shuttle buried below some bundles of lace which were priced and ready to sell. So I duly purchased it for £1. It was only a black/white milward one, but it is still going into my collection (my working shuttles are the aero ones), which as you can see isn't vast but I'm sure I saved its life! I'm always searching for old shuttles but rarely find them, so this was a treat. Then in the evening we had a meeting (Scouting and non-uniform!) and I was wearing the blue tatted necklace and discovered that someone I had known for years could tat. We were both surprised to learn of each others knowledge of the craft. Unfortunately she has only very old patterns, so obviously I've told her to look at Jane's blog and her patterns!
And then much later on in the evening I discovered that I had made many more tatting friends via this blog - thank you
Posted by Sally Kerson at Wednesday, April 22, 2009