Further to the last post when I talked about the Pop-A-bobbins there has been a major development with regard to the hooks for the shuttles.  Basically the wire used for making them is becoming almost impossible to source, especially in the gauge required.  So we are now thinking of ordering crochet hooks and I am so sad to say, mutilating them!   This will of course put the cost of the shuttles up, but on the other hand it means that "Im in the garage" can concentrate on making the shuttles even better, and he has another idea in mind on how to do that.  What we discovered when researching crochet hooks, is that they come in different sizes and these vary with manufacturers, so we are not sure what people will want,  if you have any opinions they would be greatly appreciated and will help with the final decision.  The thinner the better I hear you all shouting!

I  tatted this square recently and it is going on something else I am making but you will have to wait and see what that is.  This is not my pattern but adapted from another, but I can't remember where from.

Before I close I must tell you of some interesting wood that is being used to make some shuttles, the colour is a greenish yellow, rather like a mustard colour.  When one is complete I will show you, but there is a very limited supply so very few shuttles will be made from it.

The most popular tatted related item to be invented in our house is the Pop-A-bobbin shuttle and 'Im in the garage' has been very surprised by its success.    Sitting comfortable on the chair below, and having a good old natter, are my very own shuttles, not many considering the different woods we have in the garage. The majority of these were made for me last year and it is time to request some more! 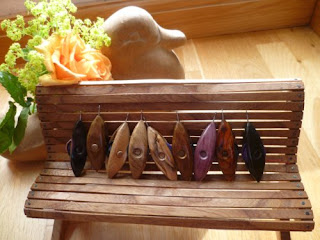 Since the Pop-A-bobbin shuttles made their first appearance here they have been sort after by many people, although not everyone.  Some criticisms are well founded, they are of course thicker and larger than an Aero shuttle, but they have to be because if the wood was too thin it would split especially with the continual use of popping the bobbin in and out each time.

The hook is hand made only because it really was impossible to get a manufacturer to supply hooks to us, so to keep costs down and without mutilating crochet hooks it was decided to keep to homemade ones.  However, the hooks are tightly fitted into a hole without gluing, they can be pulled out, but this is not recommended as they could break, so if people want to put their own hooks in it is best to buy a hookless one for this purpose.

Sometimes other bobbins are placed in the shuttle, instead of the original one supplied with it, they can then appear loose, or too tight, this is because we have found that bobbins do vary.  The plastic Aeros can take the difference because they are flexible, the wooden shuttles cannot.  To compensate for the looseness one purchaser puts hole reinforcement rings on them which usually corrects the tension.

The next shuttles will not make an appearance in Janes Etsy shop until August/September mainly because 'Im in the garage' is building a toy for himself and it is holiday time soon.  Sadly for the tatting world Pop-A-shuttles are not a priority for the garage man, and there is no way to motivate him unless his toy is taken away and he is locked in the garage all weekend!

Different woods are continually being sort after and our latest supply came from a very strange source, here it is -  mahogany, originally purchased to make coffins out of and yes we went to a funeral director to buy it. 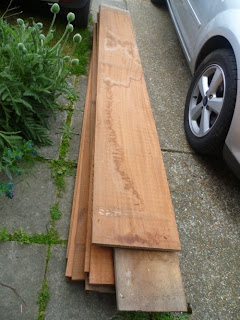 Some of the wood is hopefully going to be made into a baptismal font for one of the churches, but the rest will not be wasted and you can probably guess what it will be used for!

Our visitors from Singapore have gone and we are recovering after a really hectic week.  We visited Stratford-upon-Avon and went around the Royal Shakespeare Theatre, then on to Oxford where we went punting on the river Thames and looked around the Oxford colleges.  We travelled to Lacock Abbey in Wiltshire to see one of the settings for the Harry Potter films.  And finally a trip to the New Forest and a visit to a wildlife park where we saw some fantastic butterflies, so there was not much time for any tatting or looking at blogs. However, I did manage to see the clever design that Valerie Ho discovered from Jane's fandango bookmark. It just cried out for beads, Jane sent me the pattern to try out, although I added a button to the middle and these are the results. 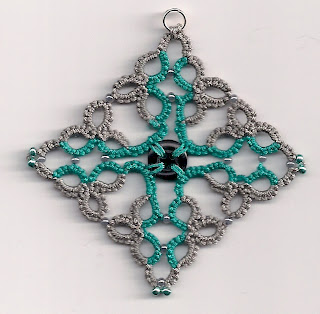 Jane is working on updating the pattern for the beaded and buttoned version. 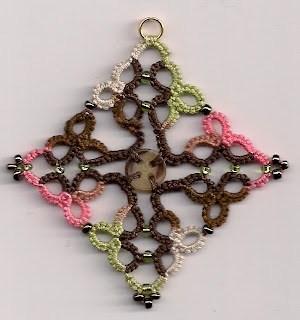 And because it is "Tatting Tea Tuesday"  here is a cup of tea, yes seriously it is  - Flowering Dragon Eye, green tea. 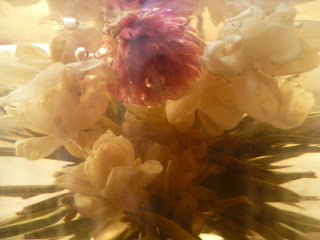 The colours seem to match the fandago square!
Posted by Sally Kerson at Tuesday, June 14, 2011 12 comments:

Time for some more shuttles 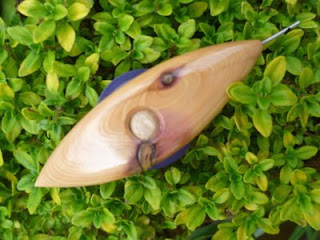 A batch of pop-a-bobbin shuttles will be travelling to Jane's home very soon, this is one of them resting on some sweet smelling thyme, a herb very useful in cooking.    The shuttle is made from yew. 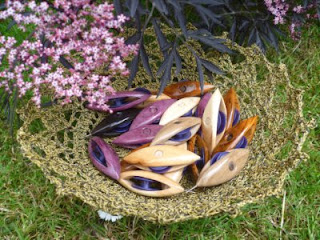 The rest of them are in a crochet basket sitting in the garden, may be there is one that you would like? 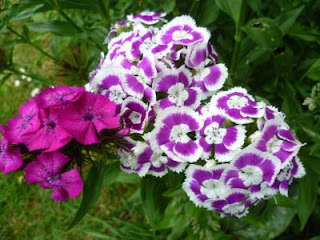 Some Sweet Williams for Gina, can you smell them? 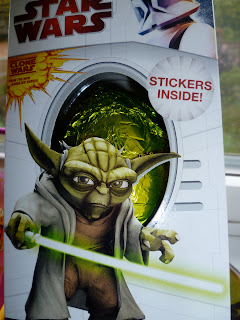 My son and his girlfriend arrive in the UK today from Singapore for a visit, so exciting especially as the same day he boarded the plane (yesterday) he achieved his 1st Dan (his name is Daniel)  in Aikido so he now has a black belt. This is what awaits him,  a belated Easter Egg, he is a big Star Wars fan, 'may the force be with you.'
Posted by Sally Kerson at Sunday, June 05, 2011 13 comments: