In recent weeks I have taken my tatting to some Christmas Fairs, although I have only managed to sell a very small proportion of what I have made. Many of the items are seasonal tatting and so they will be stored away until next year, or be given to friends.

I sort of got hooked on this pattern last year and made quite a few of these trees and did manage to sell four of them to one person today, apparently she is going to hang them on the door knobs of her kitchen cupboards!  The pattern can be found here and I really recommend it to those who have just started making split rings, because after making these trees you will be super good at them! 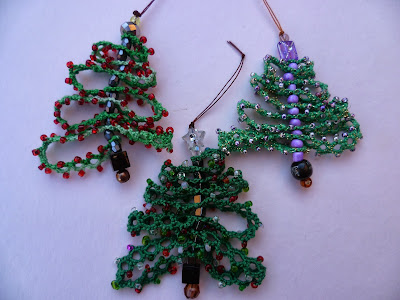 The latest news from the garage is that all the wood making equipment is being maintained and serviced, it has had rather a bashing in the last few months.  Also there were some shuttle blanks on the work bench when I last looked, so production will be resumed as soon as possible. I hope those who have already received their shuttles are pleased with them.
Posted by Sally Kerson at Saturday, November 30, 2013 11 comments:

Today is a very momentous day as most of you are probably aware for it marks 50 years since President J.F. Kennedy was assassinated in Dallas, Texas.  But it was also the day when C.S. Lewis died in his home near Oxford, England but of course his death was rather overshadowed by what was happening in America.

Tomorrow marks 50 years since the first screening on UK television of Dr. Who and so there is a special episode to mark the occasion on Saturday evening.  Although my childhood memories of Dr. Who were more to do with hiding behind the sofa as I was so frightened!

But there is no good dwelling too much on the past we have to look forward and tomorrow marks the day when the next batch of shuttles will go on sale at 20.00 GMT, and here are a few photos of them. 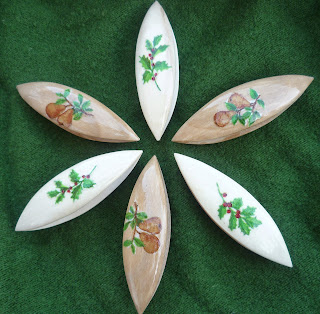 These are pear and holly wood 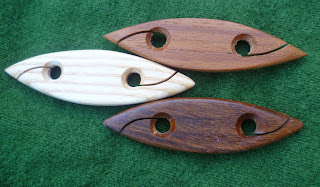 And a pair of Christmas earrings, sorry not sure where the pattern came from as I have had it on my computer for ages. 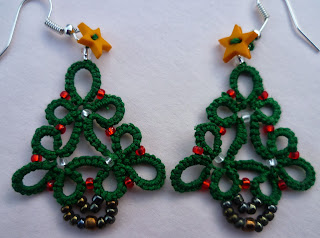 A few days ago I posted three parcels to the USA, all in connection with tatting, so I hope the recipients enjoy receiving their shuttles and other bits and pieces.  Because these parcels were international the Post Office here in England is getting very much stricter about the contents. Because of this I decided that unfortunately it would unwise to put  any red sunflower seeds in them, which was my original plan.

On many blogs it is evident that  Christmas is coming and the usual tatting related items are being shown. I find it interesting to see the wonderful variety, even from year to year, that people produce with their shuttles and thread.  This little gem was on Jane's blog three weeks ago Mrs Odums daisy (see also link to Elizabeth's blog) , and therefore I had to have a go at it before Christmas tatting set in! 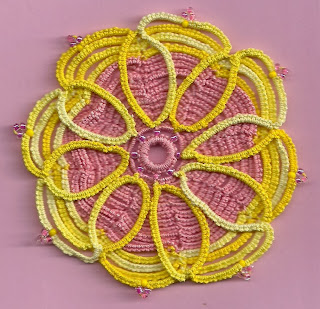 For the centre I used  little rings from a bracelet they are slightly smaller than the rings from the toothbrushes, but work well and I plan to use them on other patterns especially if they call for a ring in the centre.  By covering a ring it is possible to move onto the next row with a split ring so avoiding a join and also the centre is much firmer. 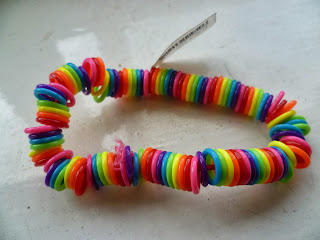 The next batch of shuttles have now arrived at Jane's house (my sister), she needs to sort them and list them and they will be put into her shop very soon.
Posted by Sally Kerson at Sunday, November 17, 2013 5 comments:

Poppies and a Winner!

As promised I can now announce the winner of the giveaway from the last blog post.  But before I do, thank you so much for the wonderful memories that you shared, all of them were really so touching and personal and just made me think that these little gems from our lives make us who we are.


is mb duke, please can you send me your address to popabobbinshuttle@gmail.com and congratulations!

I made this poppy four years ago, it was my first and last attempt at this technique which Martha so kindly shared, perhaps it needs revisiting. 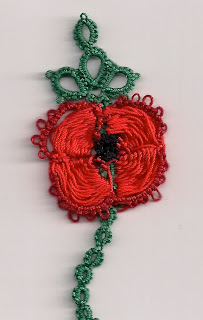 Here is the one that my son made, no he is not a child but now aged 37 years old! 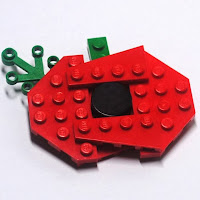 I will never forget Remembrance Day this year as  I moved into another part of the church building today where there is now a new Parish Office.  Well have not actually completed the move but the computer and main bits of equipment are now in there.   In fact it was really hectic this morning,  one of the pre-school helpers was dressed as Luke Skywalker, an electrician was sorting out the odd bits left from the recent building work.  The Vicar and I were trying to move office equipment and another person was sorting out the computer etc so it was a manic and crazy morning!

In England we mark this day with bonfires and fireworks, although as the years have gone by it is less and less observed.   The reason we are called to remember the 5th November is that on this day in 1605 Guy Fawkes was caught in the cellars of the Houses of Parliament, London with several dozen barrels of gunpowder. Guy Fawkes was subsequently tried as a traitor with his co-conspirators for plotting against the government. Which is the reason why a 'Guy' is made by stuffing newspaper into some old clothes to look like a man and then it is put on the top of the bonfire.

So if you have stopped reading this blog by now you will not have realised that I am holding a 'giveaway' to mark this my 300th blog post, a day to remember for me and possibly you!

This is what you will win when you comment giving one thing that you will remember for the rest of your life, the memory can be happy or sad. 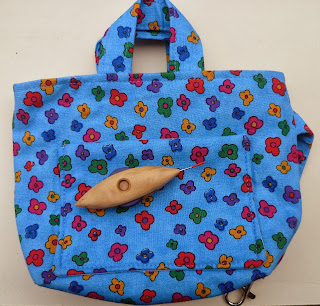 This cute little bag was made locally and it is a handbag organiser, although it doubles very well as a tatting organiser!

I also plan to put a few other things in it, which I have yet to source, but of course a
pop-a-bobbin shuttle will be neatly tucked inside.  This particular shuttle is made from apple wood.  A great many pieces of wood that are stored in our garage have a story behind them. The apple wood this shuttle is made from comes from my late father's garden which was situated on the banks of the river Avon in Stratford-upon-Avon, so my memory at this very moment is of him and where he lived. 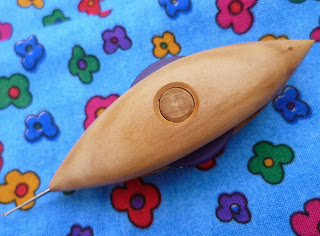 You have until Sunday 10th November 4 pm GMT to comment.  I will announce the winner by using a random number generator on Monday 11th November, which in England is Remembrance Day. A day when we remember all who have died or who have been injured in the World Wars and subsequent conflicts.

So share your memories with others and may be you will be the winner of this bag and shuttle!
Posted by Sally Kerson at Tuesday, November 05, 2013 46 comments: