The last few hours of the year and I have no tatting to show, but I am surrounded by thread and beads in anticipation!  So instead of tatting I will show you a few pictures of our Christmas pyramid. 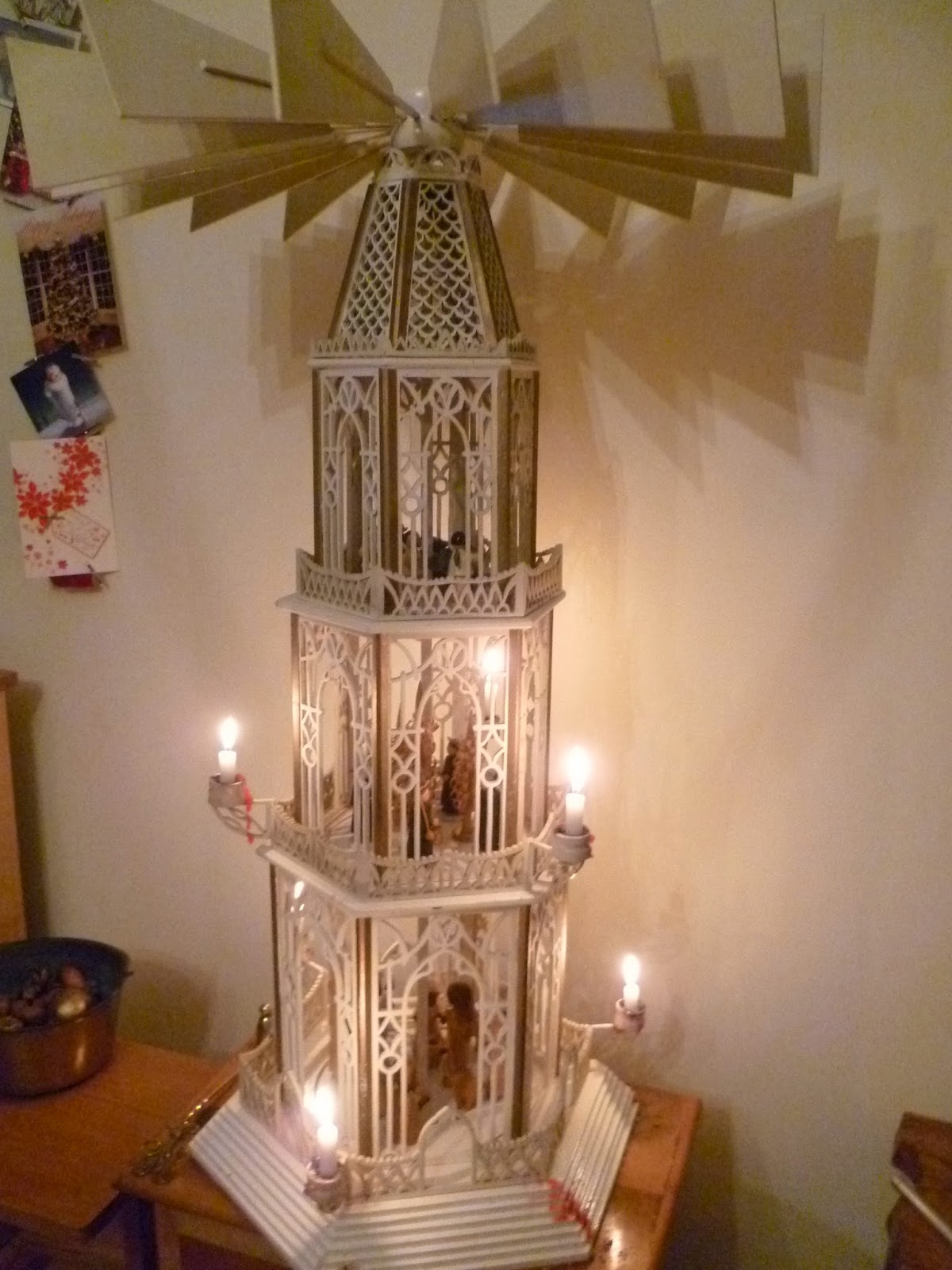 On each floor of the pyramid there is a different scene 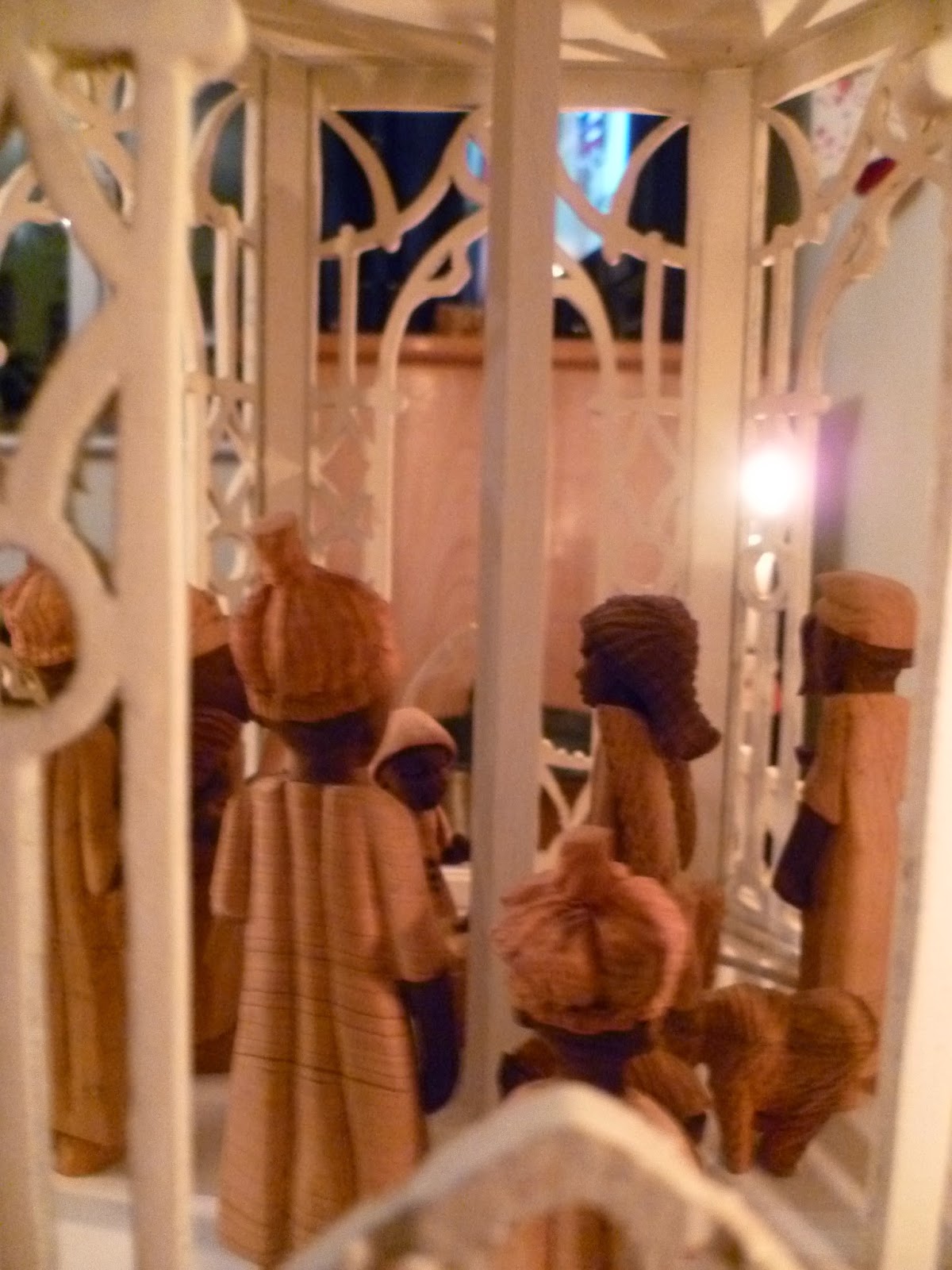 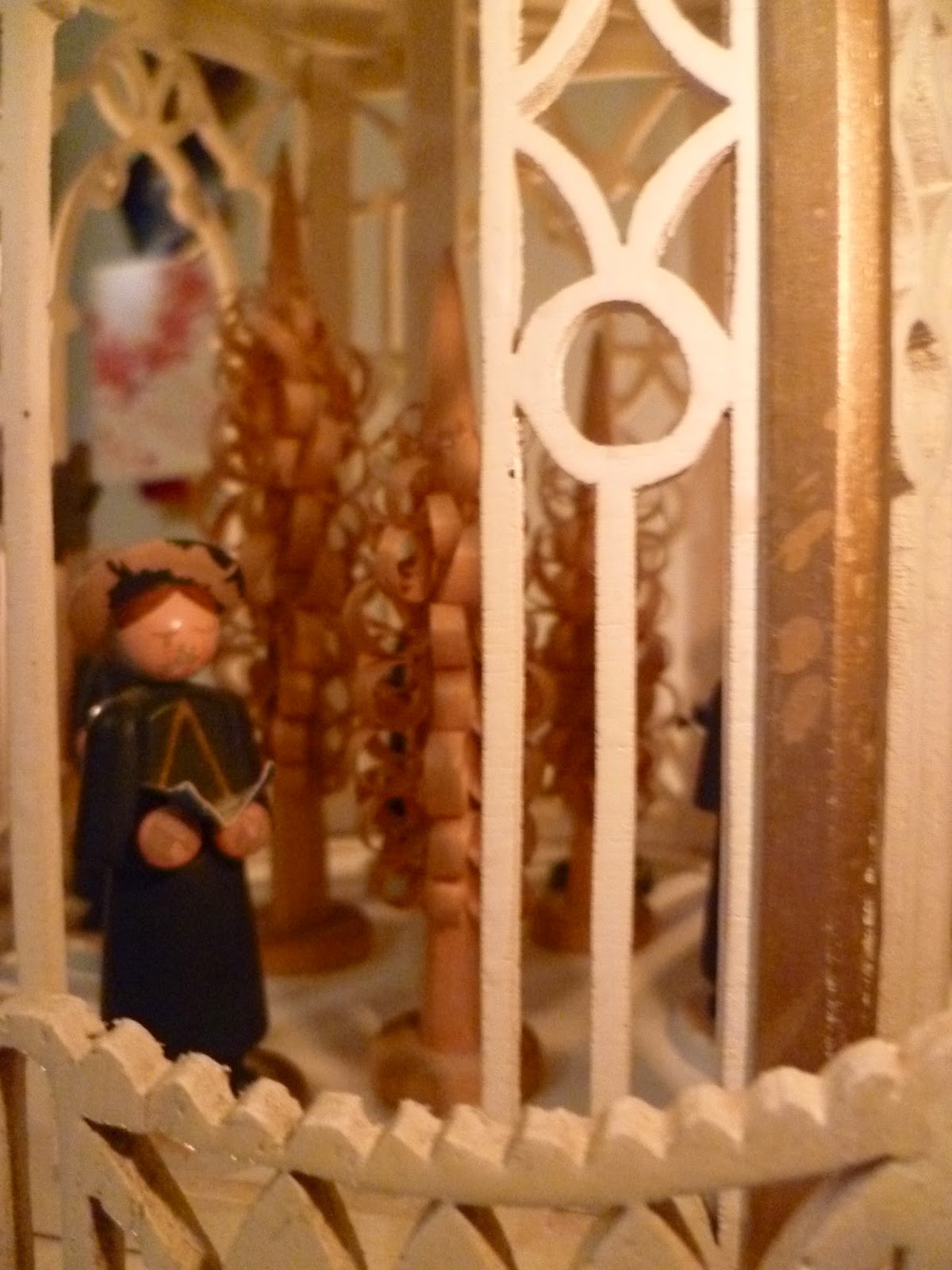 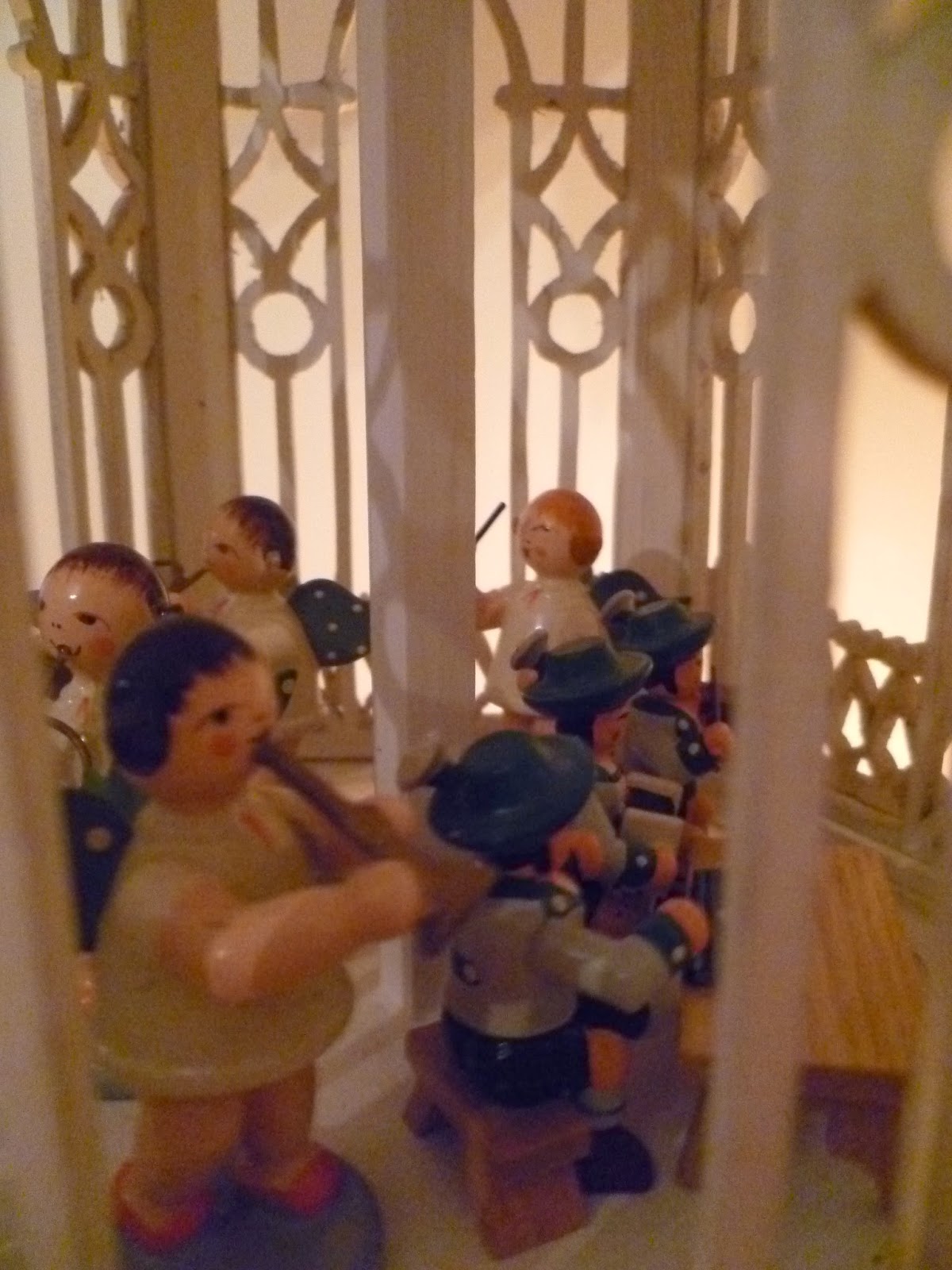 As part of their Christmas presents 'Im in the Garage' made my two sons these boards, the small one was posted to Singapore and the large one was given to my son who lives in England. Each have some interesting woods in them and it was fun seeing which particular wood looked well together before being glued and clamped. 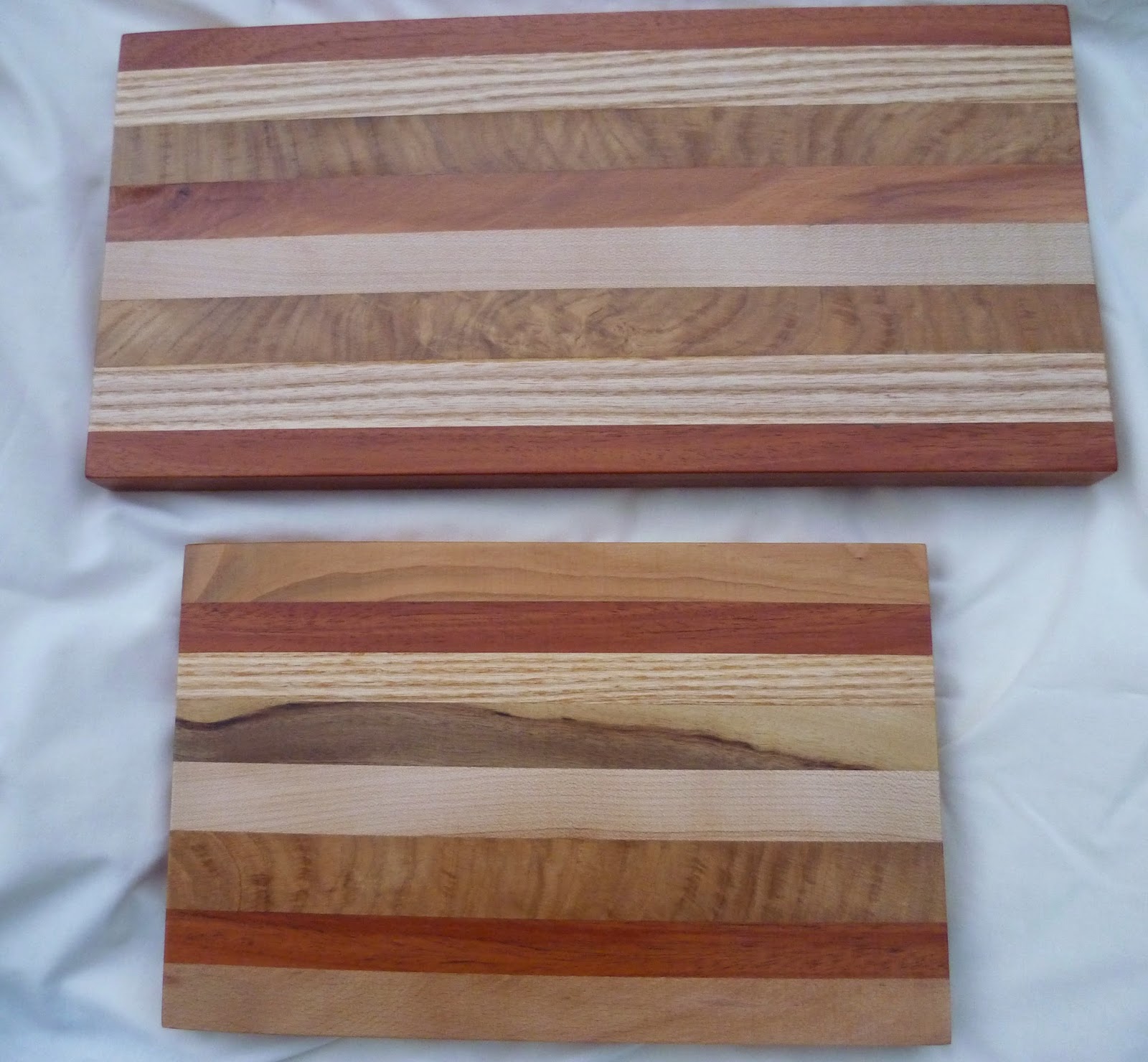 And this is my present

The wood is Oregon Myrtle kindly sent by Karen, quite a long time ago now, it is such a lovely wood that I just could not let all of it go to make shuttles.  The glass embedded in it is antique and was purchased from Camden Market, London about 10 years ago.

Today is Boxing Day, it was the day when the alms box, collection boxes for the poor often kept in churches, were traditionally opened so that the contents could be distributed to poor people.   This box is in the wall of one of our churches but the key is lost so we are unable to open it! 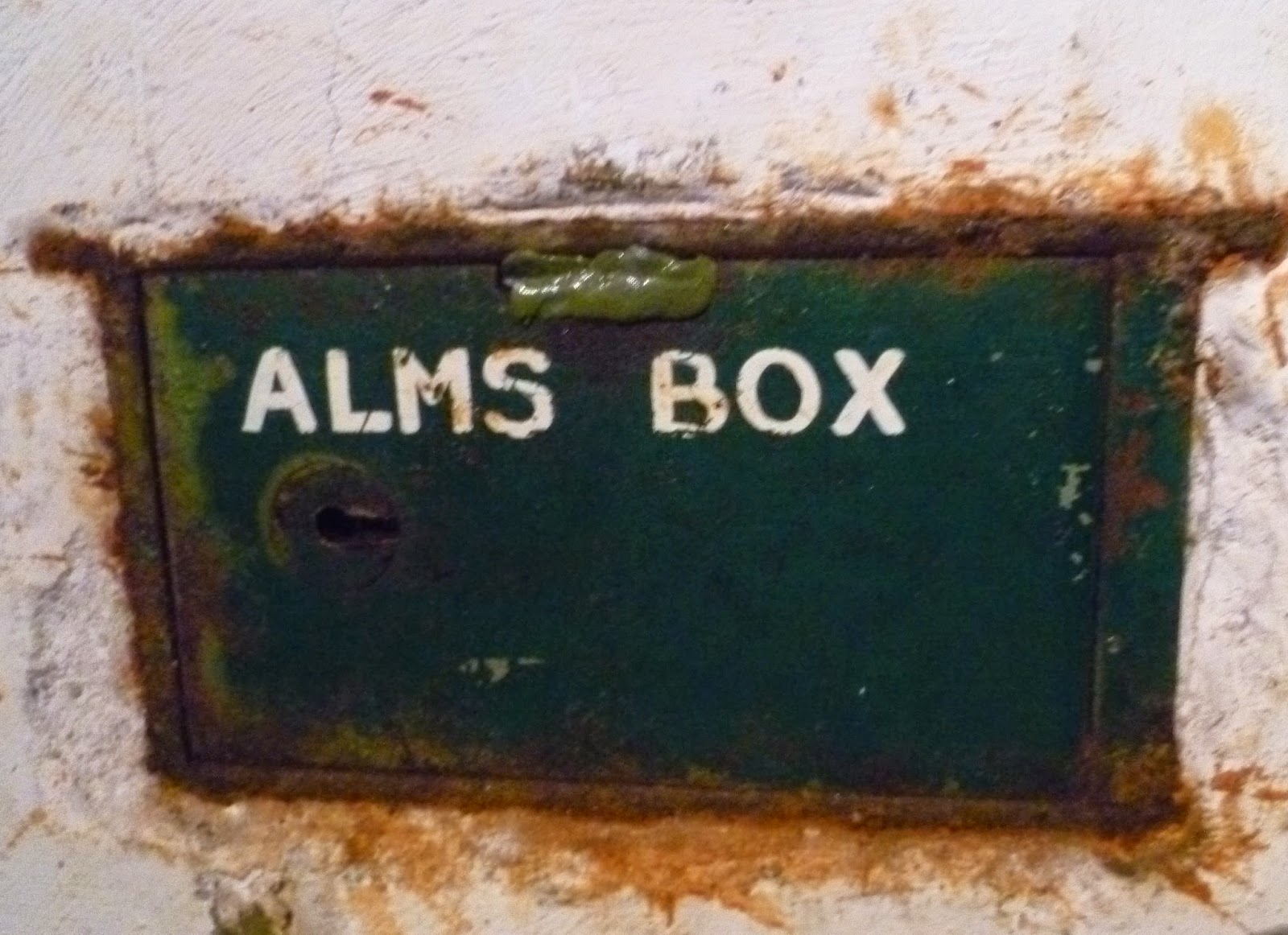 It was also traditional that servants were given the the day off to celebrate Christmas with their families on Boxing Day. Before World War II, it was common for working people (such as milkmen and butchers) to travel round their delivery places and collect their Christmas box or tip. I remember this tradition from my childhood when my parents would always have a tip for the postman, the dustman etc. but it  has now mostly stopped with perhaps some of the older generation carrying on the tradition in some way.   Boxing Day is also a holiday but for some it means the start of the Sales so many shops are very busy and doing a good trade.
Posted by Sally Kerson at Friday, December 26, 2014 13 comments:

In case you think that I have just made these stockings, the answer is no.  I put them together last Christmas, however the Snowman and Santa Claus I tatted over 20 years ago.  They come from The Complete Book of Tatting by Rebecca Jones and in those days it was the only tatting book that I really used patterns from, there was no Internet and the book provided some different projects such as cats, butterflies as well as an abundance of Christmas tatting.  How life has changed in the tatting world since then. 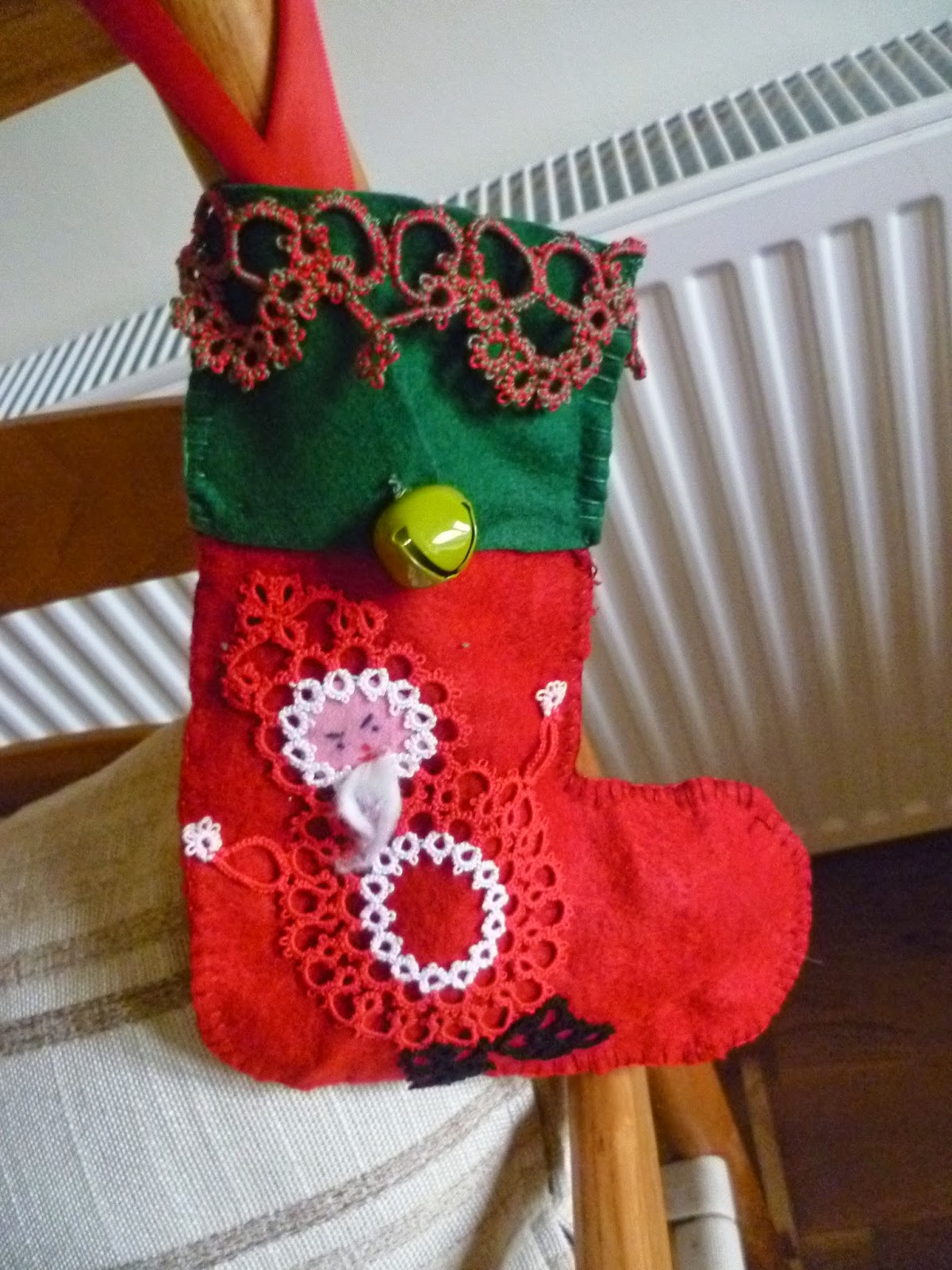 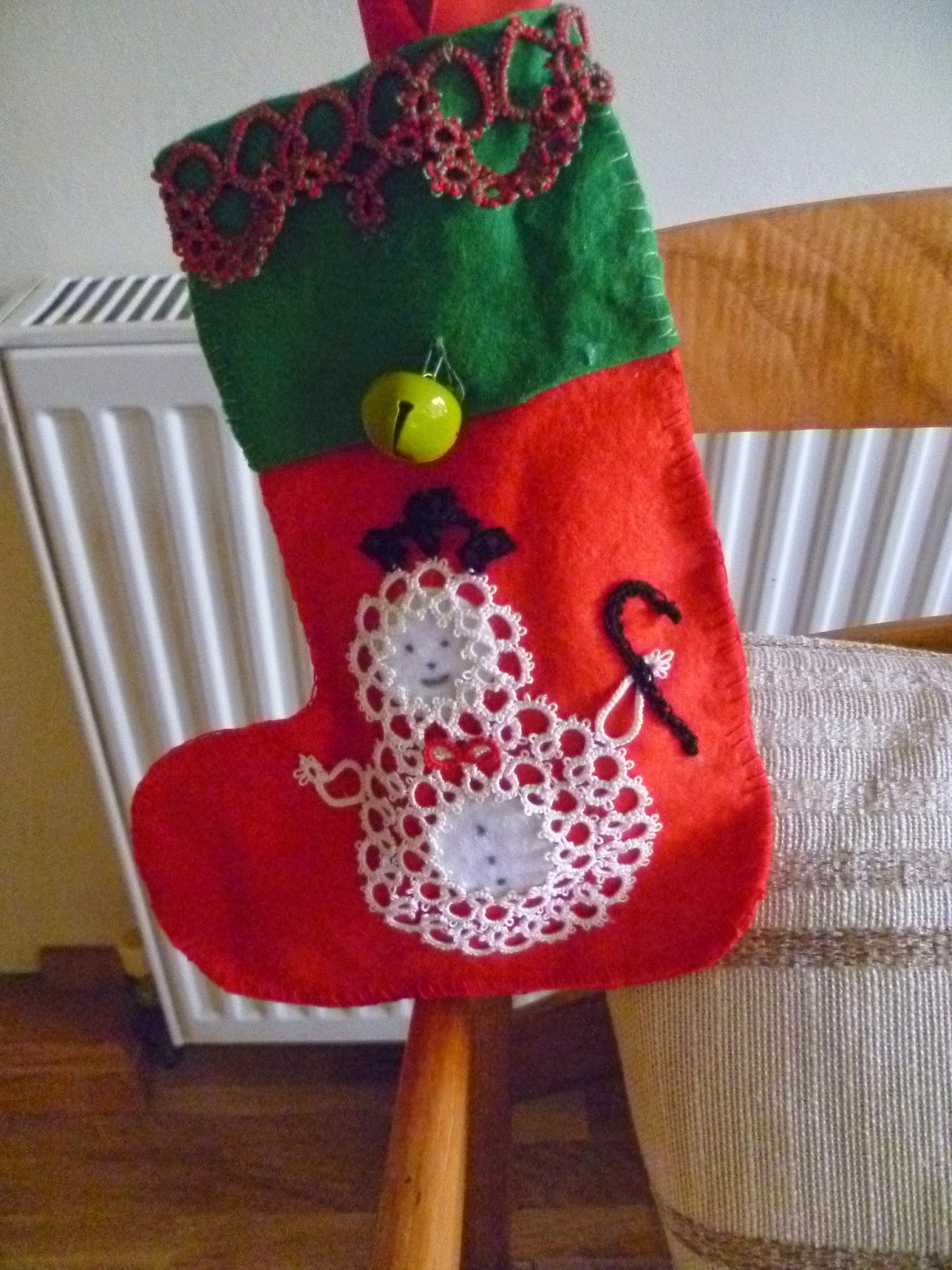 They are hanging on a Shaker Style Rocking Chair that 'im in the garage made and if you sit on it they give off a lovely jingle sound! 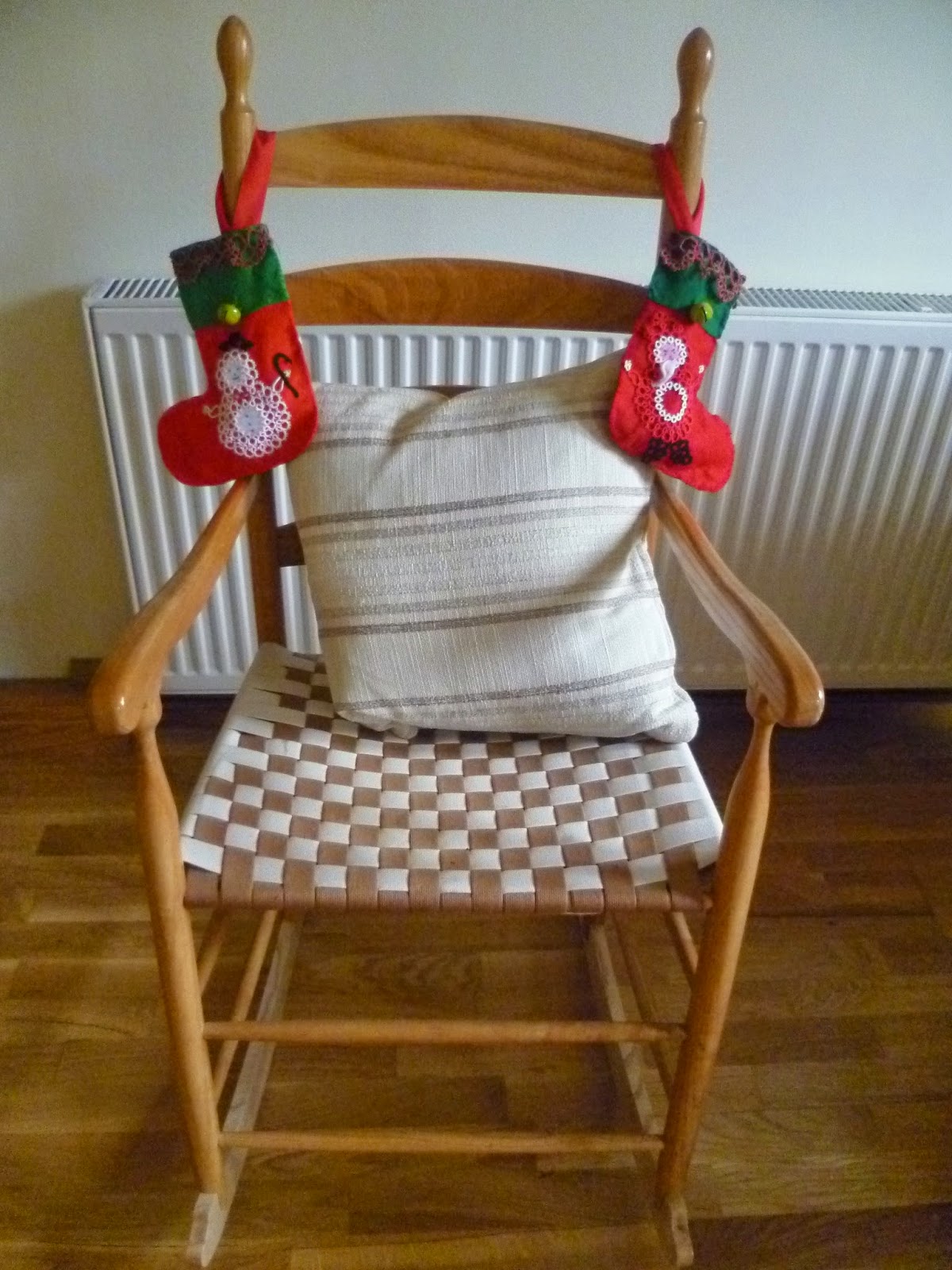 Thank you for all the suggestions on what to do with the Christmas baubles, due to not feeling that well I only managed to put them in this cloth container, will make more of an effort for next year! 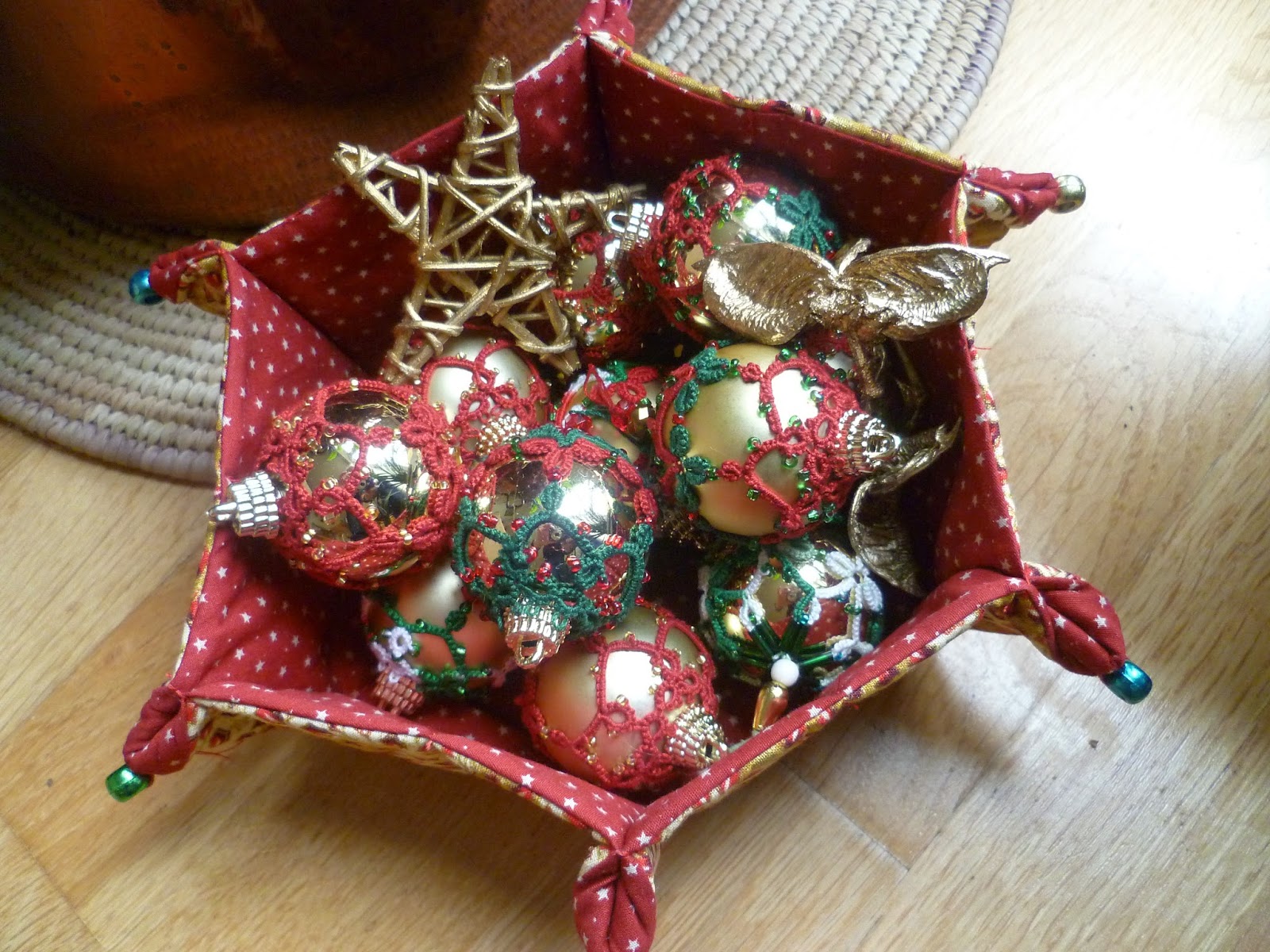 Every time I think about tatting someone else's pattern to cover  Christmas baubles I seem to come back to my own, probably because I know it will fit the ones I already have.   I now have a box full of baubles covered in tatting, sadly that is where they will  remain as there is no Christmas tree in this house to hang them on, next year is the time to have a grand clear out and give them all away. 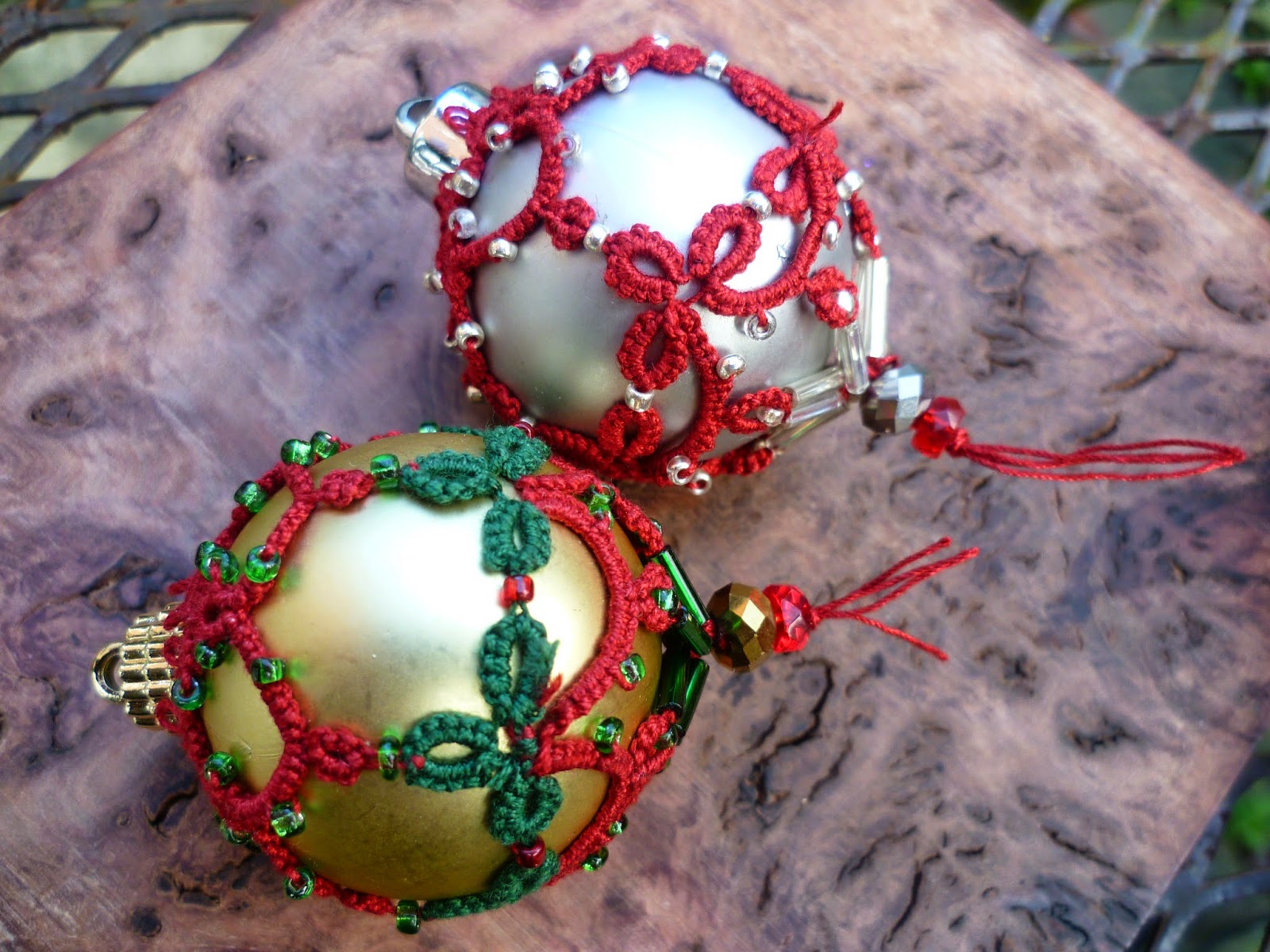 Another box contains these 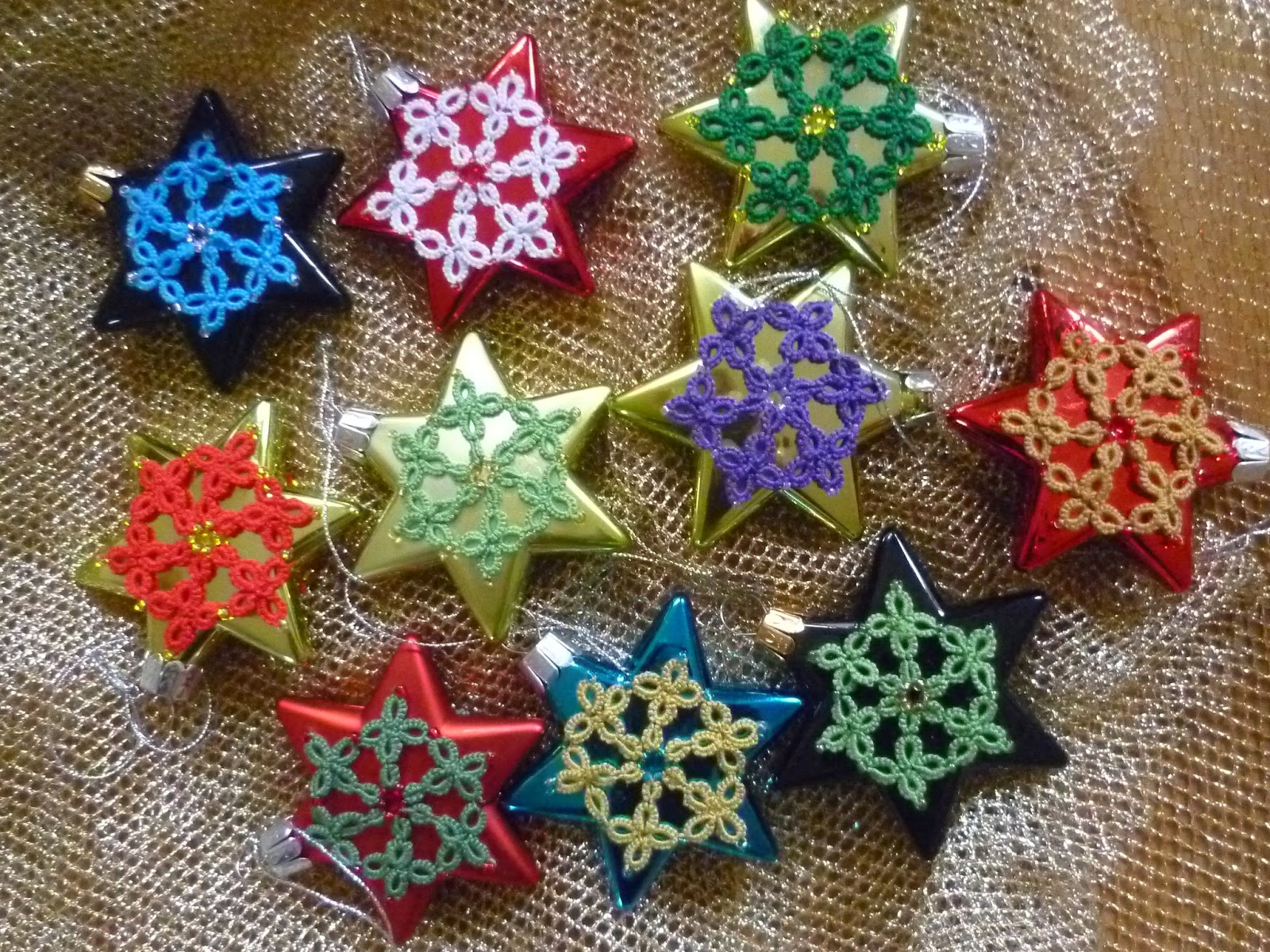 And yet another box contains these 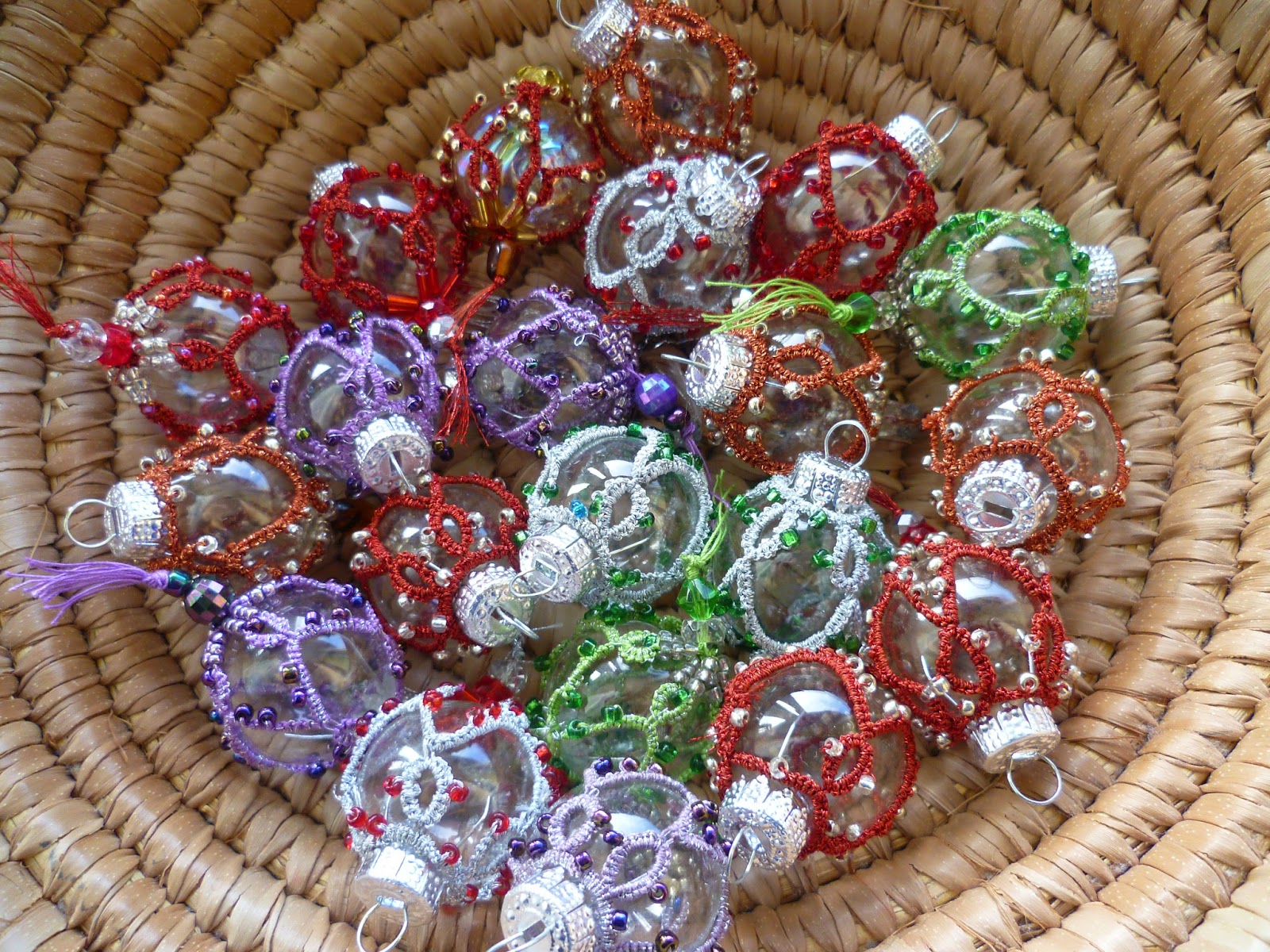 There is a final box of baubles but I don't seem to have a picture of them at hand.
The patterns for the large and very small baubles are on this blog.   I do hope your Christmas Tatting is going well.
Posted by Sally Kerson at Sunday, December 14, 2014 19 comments:

Since October I have been steadily making holly wreaths, mainly to give away at Christmas. The pattern that I am using is Sharren Morgan's Merry Wreath  pictured on her blog. She brought the pattern to the Tat Days in 2012.  I had the great pleasure of meeting her there and being in her class.   The main difference between my my holly wreaths and hers is that I put beads around the outside as well as the inside, obviously to represent holly berries and I also tatted a bow. 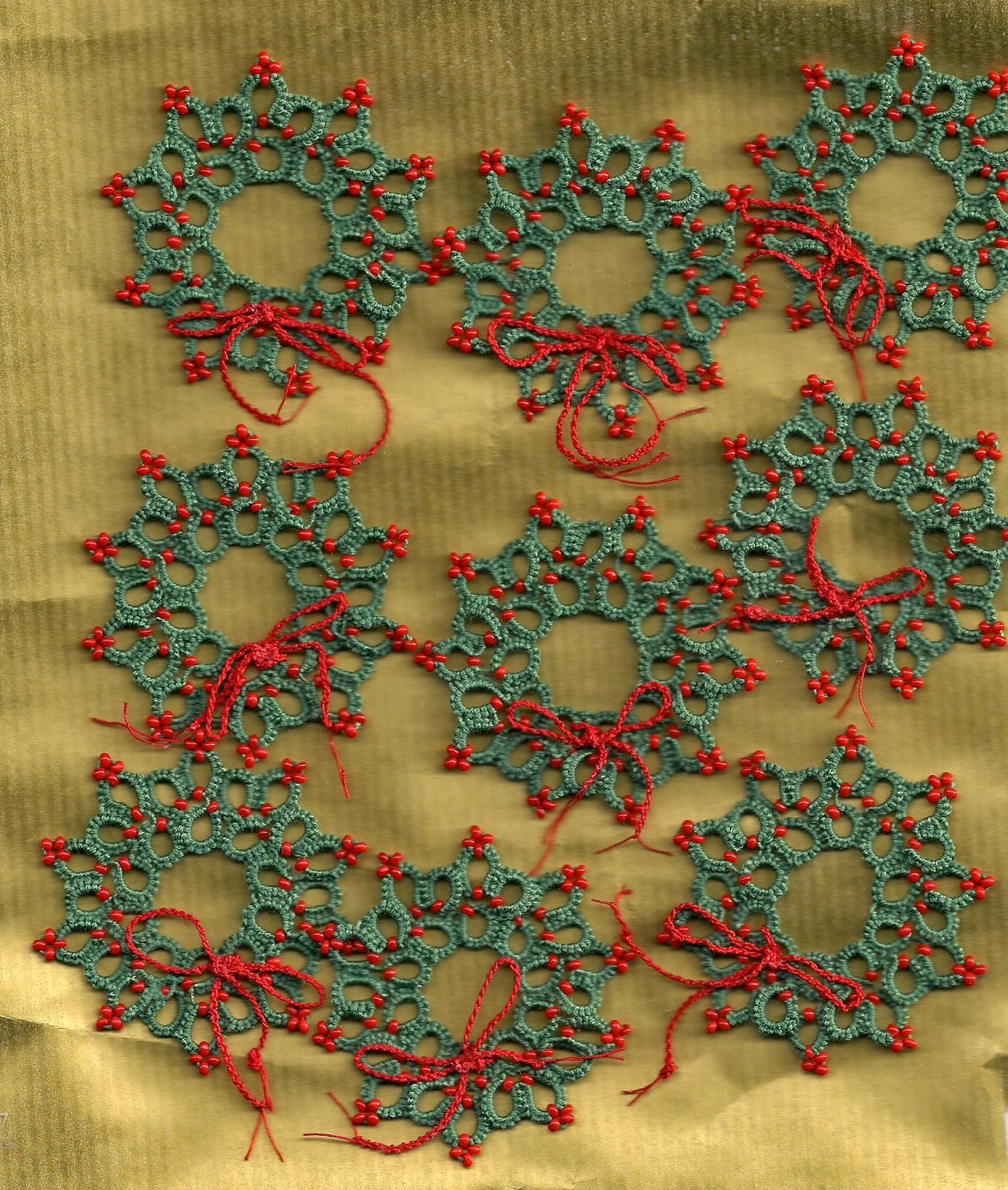 I have now made well over 20 of these and used up hundreds of tiny red beads, but fortunately I have a huge packet of them which one of my sons brought make from Asia a couple of years ago, they make excellent berries. 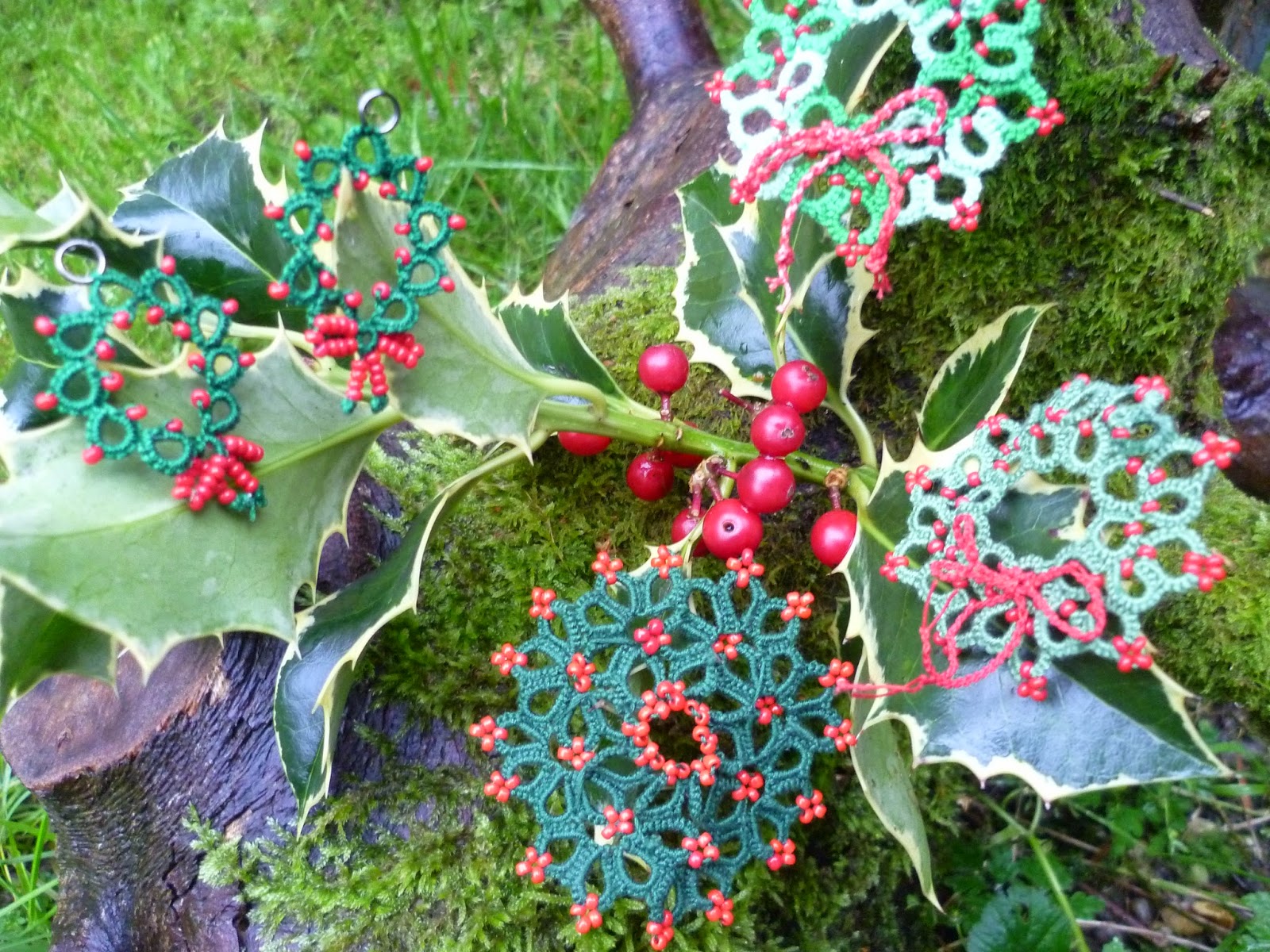 In this picture is a real piece of holly and it is covered with holly wreaths, including earrings. At the front is Mary Konior's Posy pattern which also has lots of beads added to it.

Well back to making more as I don't want to find out at the last minute that I have run out!

Before I announce the winner I would like to thank everyone for entering and writing such lovely comments. Just to explain that I started the count from Stitcherty Grub because Anne above then sent me another comment!  Anne I will take a photo of the stand when the Advent wreath comes off after Christmas.

So the lucky winner is Jenn, who said she would gift it to "the person who taught me how to tat, my cousin".  Please can you e.mail me Jenn on popabobbinshuttle@gmail.com

For those of you who seem to miss the pop-a-bobbin shuttles when they go on sale, there is a chance to bid for two that I have now put on e.bay, they are the old type of shuttles, perfectly usable but the hooks were homemade.  Just look on e.bay UK under Tatting Shuttles. 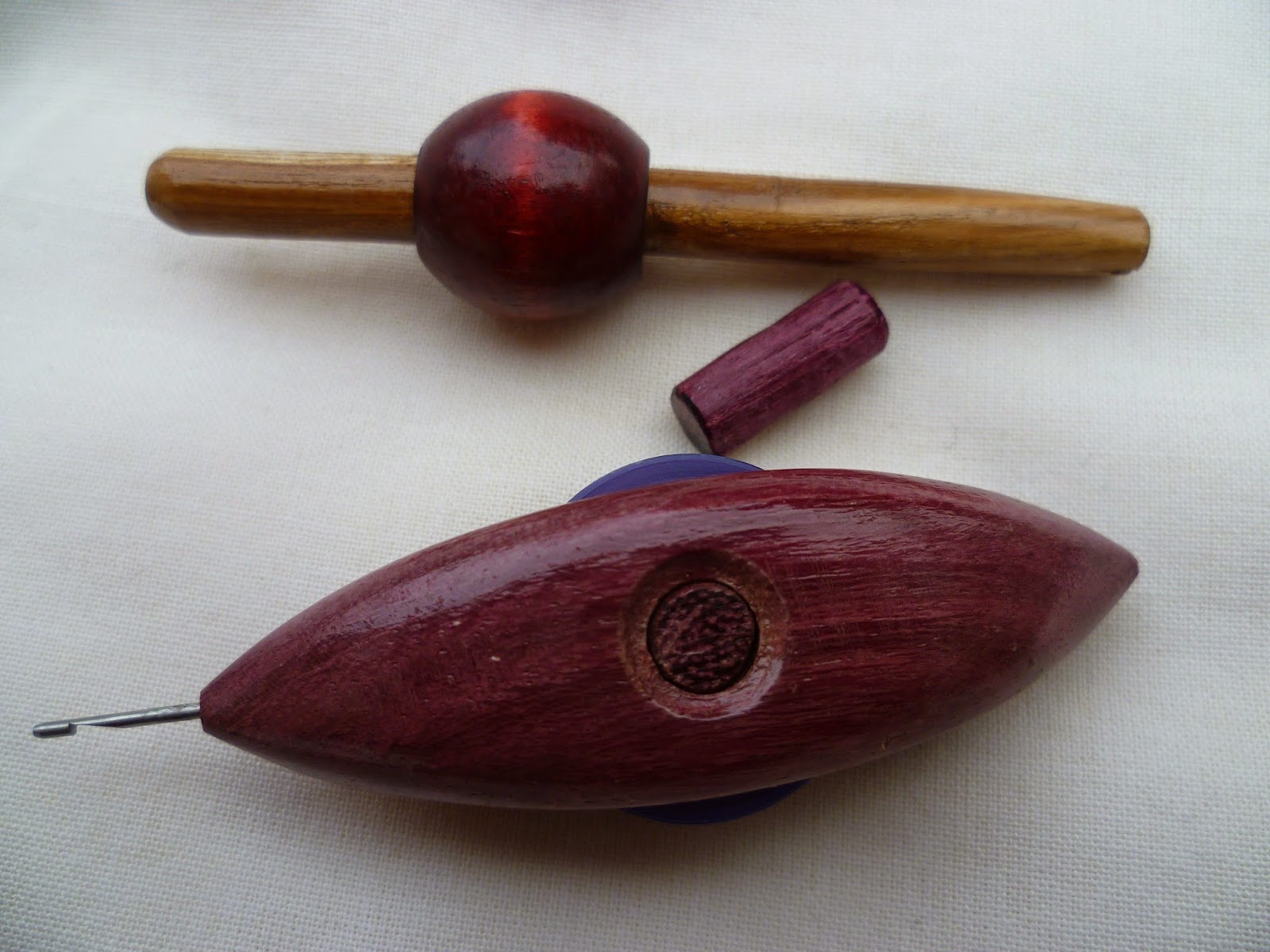 This is the purple heart one