Flying Saucers - to be a child again!! 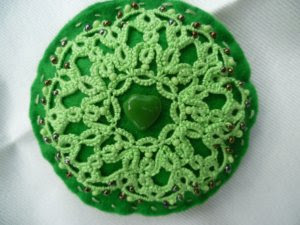 In the 1960s you could buy flying saucer sweets  - which are like two coloured communion wafers  (rice paper) with a bit of sherbert in the middle.  I can well remember walking back from school and purchasing four of them for just a penny from the sweet shop.    I made this small needle cushion to look like one as I can never find a needle especially when  finishing a tatting project. The pattern is my own but is a little crowded, not sure if I want to revisit it at the moment but the nice thing was it was made in one hit.


Now you can buy flying saucers packaged in sealed plastic bags but somehow they do not taste the same, or have the same appeal as the ones that were put in a paper bag for you, once you handed over your precious penny. 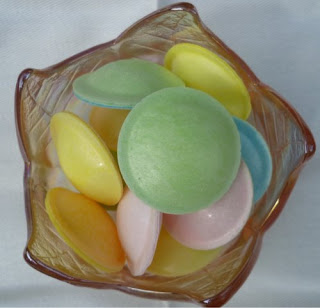 Perhaps I long for those days when sweets were a luxury and were cherished by children and so I covered this tray with them!  Notice the flying saucers. 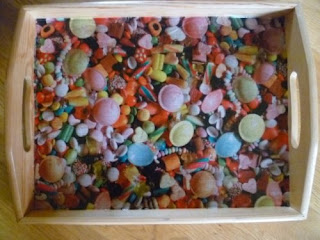 Just one picture of a Beaver Scout enjoying himself on Saturday it was a fun filled day and all the children and adults enjoyed themselves.   The weather also stayed fine which was a bonus after an awful week of rain. 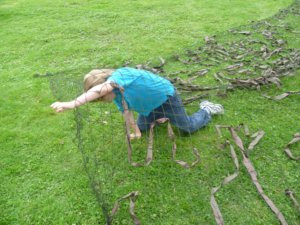 This is not a child being captured in a net, in case you thought it was! It is the last part of an assualt course which they absolutely loved.
Posted by Sally Kerson at Wednesday, July 27, 2011 4 comments: 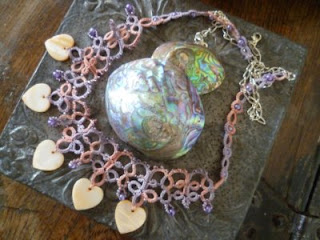 Finished this necklace today, started it months ago but became very lazy when it came to attaching the findings.  I did not follow a pattern, so fairly pleased with the result.  I think the thread is Lizbeth sea shells. My problem is that when I tear open the packet to get to the lovely threads - I loose the label in my excitement!

Thank you to those who were concerned about where we are going to hold our Scouting event this weekend.  Fortunately we have found another field attached to a Scout headquarters that is available, this is a rural area but as you can imagine such places are in demand in the Summer months.  The theme of the day is "Long John Silver" to celebrate 25 yrs of Beaver Scouts and so pirates are the order of the day. Activities will include, walking the plank, collecting gold treasure coins, making pirate hats, plus an assault course.  The weather has slightly improved, so hope nothing else will mar the day. Everything has been purchased and my car boot is full, now need to work out timings. 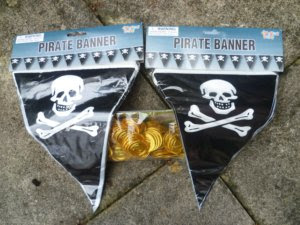 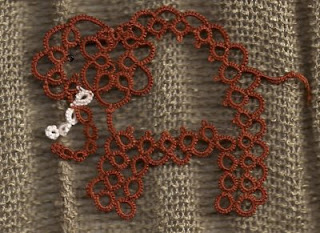 I went to an exhibition of quilts this afternoon and here is one with elephants. 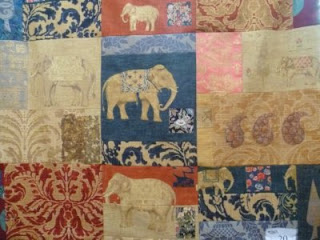 Here is a line of elephants

Just to let you know that I have ordered more crochet hooks this time 0.60 mm for the pop-a-bobbin shuttles, not sure if they will be suitable, but worth a try.


I am looking forward to being able to find more time to tat.  Next weekend is a Scouting event which I am trying to organise but unfortunately travellers have decided to take over the field we were going to use, so the event will have to be re-located somewhere else, you have no idea the amount of extra work this is generating for me, even less time to tat!

Today marks the end of a really busy time preparing for the local Arts Festival which has involved three of our churches. There has been a lot of administration work as well as helping set up and co-ordinate the events.  Last weekend one of the churches was open for a flower festival and this weekend the two remaining churches were open, one for an exhibition of art and the other was filled with flowers and fabrics.  They were all well attended and the thought now of removing all the displays is a bit daunting.   I was able to exhibit my tatting in this weekend events, the pew ends which were in this post, and this little display of crochet baskets with tatted flowers,  butterflies and bees. 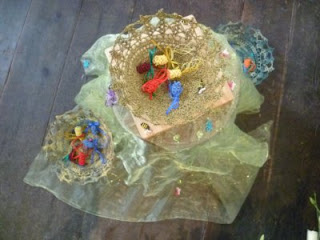 There was a seaside corner which had this little picture in it. 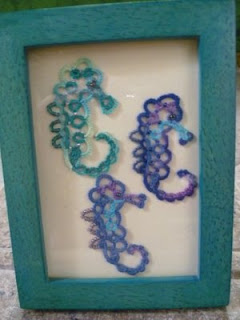 In the other church these pictures were exhibited 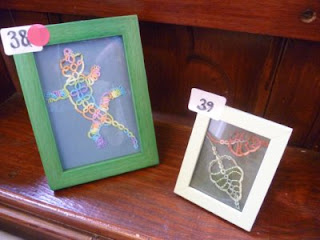 The red sticker means that someone has purchased it. There was also an angel picture, but it kept flying around the church and each time I visited was seen in a different place!
Although the seahorse picture was not actually on sale as it was part of the flower and fabrics display someone is keen to buy it.  I also had a lot of people interested in tatting, many said that they had never seen it before whilst others declared it a dying art.  One person this morning said she tried to learn the craft many years ago and still had her shuttles I pointed her in the direction of the internet and hoped that by looking at blogs and following the many tutorials she would soon pick it up, and left my contact details too.
Above all I felt pleased that I had put tatting in front of so many people as a useful and versatile  craft as well as a work of art.
Posted by Sally Kerson at Sunday, July 10, 2011 6 comments:

It is of course American Independence Day -  it is of course my birthday, a major one!
But 4 7 11 (pronounced "four-seven-eleven")  is also the name of a very famous Eau de Cologne.  I  have known of this perfume ever since I was a child and have always associated it with old Aunts, gosh I'm one myself now! It is more of a nostalgic kind of perfume, not one that I would go out and buy for myself.  However,  I found this little bottle unloved at the end of a Summer Fete a few weeks ago, so purchased it for 50p! 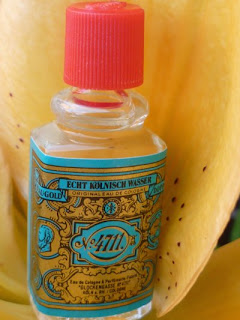 I was at the cathredral yesterday attending an ordination service and whilst robing in a side chapel with many others I noticed a priest who had, what looked like some tatting on his stole.  I kept looking at him, or rather his stole, and in the end had to ask him if that was a piece tatting on it.  He said he did not know as he acquired the stole many years ago off someone else.  Anyway I was allowed a closer inspection and it was a tatted cross in gold thread, quite large, I then showed him the tatting around my surplice but I have to say he was not really impressed!

My latest button necklace made with Yarnplayers HDT Garden Afternoon, and the colours are just right for this time of year.  I wore it with a flowery top at a church Flower Festival and was asked by a few people, did I make it? How was it made? Did I take orders?   Next weekend there is another Flower Festival or rather a Flower and Fabrics Exhibition, in another church which will have some of my tatting on show, so hopefully I will be able to show you some pictures next time of both the flowers and textiles.
Posted by Sally Kerson at Monday, July 04, 2011 19 comments: