Season of mist and mellow fruitfulness

We are falling into Autumn in England the leaves on the trees are changing into beautiful colours, there are misty mornings and the air has a chill in it.

These leaves are from a pattern that Jane designed and I have been wanting to make them ever since she showed them to me last year.  Then Sue Anna so very kindly sent me some samples of the new Lizbeth threads and that was it I knew exactly what I had to use them for.  Two are tatted with Autumn Spice and the other Leafy Greens. 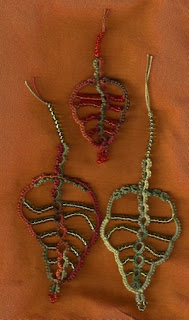 Season of mists and mellow fruitfulness,
Close bosom-friend of the maturing sun;
Conspiring with him how to load and bless
With fruit the vines that round the thatch-eves run;
To bend with apples the moss’d cottage-trees,
And fill all fruit with ripeness to the core;
To swell the gourd, and plump the hazel shells
With a sweet kernel; to set budding more,
And still more, later flowers for the bees,
Until they think warm days will never cease,
For Summer has o’er-brimm’d their clammy cells.

These gourds were outside a village flower shop and they looked so beautiful so I decided to photograph them, which was a bit of a cheek as my intention was not to buy any, well not at the price they were charging! 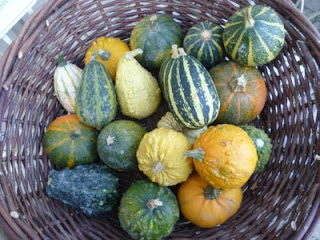 Here is part of the menu showing what we had to eat at our harvest supper on Saturday evening. I made all these soups catering for 38 people and my hands were so sore after chopping up all the vegetables especially the butternut squash which like all gourds has a very hard skin. 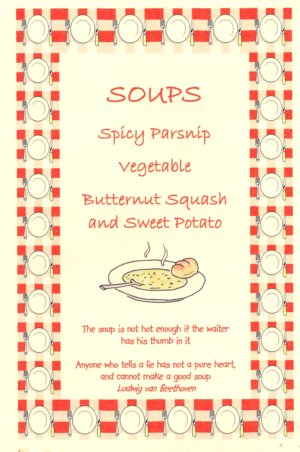 You will notice that the member of our congregation who typed and printed this menu has a very good sense of humour!
Posted by Sally Kerson at Monday, September 27, 2010 8 comments:

There has been a bit of a change in my life recently, oh not dramatic, just that I am now the proud owner of an Apple Mac mini, not a Mini Mac or it sounds like a hamburger!   I was getting on fine with it until yesterday then suddenly when moving the mouse over some of the icons in the dock they went "puff" and disappeared, of course I must have done something wrong to make them do that.  My son set up the computer and has gone back to Singapore and unfortunately says he is out now, the time zone is a bit of a problem.  Jane has tried to help via e.mail but now fear has set in and I'm reluctant to press anything else! 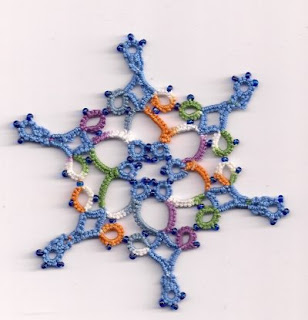 So fiddling with a new computer and a new camera has not given me much time to do any tatting but I did manage to make one of Jane's flurry snowflakes.  Yes a new camera as well, so the quality of the photographs that I post on this blog should now improve. 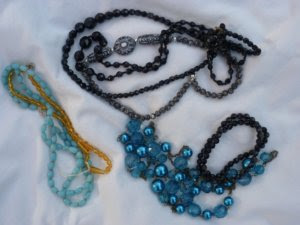 And the "old" well these are some beads that I purchased in the last few weeks, the ones on the far right are from e.bay and were sold as broken, they are glass and look "vintage".  The others beads are mainly plastic, some I got from the tip when I was with Jane and the others from my local tip, it was a surprise to see them as usually there isn't much to purchase when visiting the one in my area.  They are to be used in tatting, well at least that is my aim!
Posted by Sally Kerson at Wednesday, September 22, 2010 8 comments:

"I'm in the garage" has been sourcing wood again and fortunately, although perhaps unfortunately for our friends, a pear tree decided to split and a huge branch came down on their garden laden with unripened pears.  The result was that "you know who" jumped into his van with chain saw in the back and had a really good Saturday afternoon salvaging some lovely pear wood. 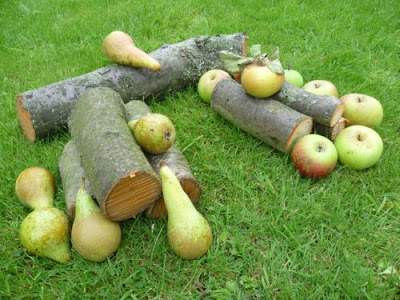 The picture shows some of the results of his hard work, the pear wood is obviously the pieces with the said fruit on top and the same goes for the apple wood, which has come from one of the trees in my late father's garden. "I'm in the garage" has been after these English woods for a long time and is so delighted that he now has a good stock of them. Eventually he will be able to make plenty of shuttles from these pieces.

"Apples and Pears" is a well known Cockney Rhyming Slang for "Stairs".  A Cockney is someone who was born in London within the sound of the "Bow Bells" (St Mary-le-Bow Church in Cheapside).  The origins of Cockney Rhyming Slang are uncertain although it is frequently suggested that it began its life as the tongue of the London street trader, the costermongers, perhaps in an attempt to conceal their often illicit practices from the public or more importantly any illegal activities from the recently established police force, known as the "Peelers".

Here are a few more examples of Cockney Rhyming Slang :
Adam and Eve  =  Believe
Dog and Bone   =  Phone
Daisy Roots     =  Boots
Brown Bread    =  Dead
There are plenty more, some probably not a good idea to publish on this blog!  But just imagine listening to a sentence with these words in and trying to understand what the person is on about.

Now more shuttle news - Jane is going to be putting more shuttles in her shop later on this week, would you Adam and Eve it!  Details will be published in her blog tomorrow, this next batch will include the large post shuttles with hooks on.  So go and have a butchers!
Posted by Sally Kerson at Monday, September 13, 2010 6 comments: 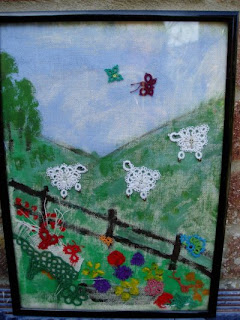 This picture was painted by the same person who created this one.  She lives in Ireland and last year I took a few tatting pieces over for her to make another picture.  As you can see there are Martha's sheep and Jane's wheel barrow amongst other small flowers and butterflies. Sadly I was unable to collect the picture myself and enjoy a holiday, it was brought back for me by a friend.


When my sister Jane first forced me to start this blog, late one night, it was intriguing to see my first follower, which of course was big sister!  Then very quickly the numbers grew, which enabled me to find out about other interesting blogs, and so the story continues!     Yesterday however, after arriving back from seeing big sister, I noticed the followers had gone up to 100, a magic number and in honour of this I would like to send a small present to the 100th person. It was lovely to see Sharren's smiling face, so if you are reading this Sharren please can you comment with your e.mail.  Of course would really like to thank all the many loyal followers who dip in and out of this blog from time to time you are all valued, many I seem to know quite well without even having the pleasure of meeting you!
Posted by Sally Kerson at Monday, September 06, 2010 5 comments: