I have been absolutely overwhelmed at the response to my 100th post giveaway, and there is still time to enter! Thank you so much.  As I write this there are 91 entries so there could be 100 or more when it closes on Saturday. The comments are all so encouraging and wonderful and in some cases humorous (StringyDogs).  It is also good to hear from people who know or remember this part of the world (Robert Kent). Those new to tatting who have found "Tat's Heaven", and even those who have not even picked up a tatting shuttle yet! - can you be encouraged to do so? Last but not least to read the comments from those who I have got to know through this blog and are now my "tatting friends".  I wish you could all win, but there are not enough shuttles and boxes to go round for that to happen! Sorry.

For those of you who are unfamiliar on how to purchase the shuttles that "I'm in the Garage" makes, this is what happens. When they are made they are put into my sister Jane's Etsy shop. This happened this morning and they were all sold in less than 24 hrs!  However, next time Jane said she would release them later on in the day to give those on different time zones a fairer chance. Sadly we have found it impossible to make them to order as so many people want the shuttles at the moment and there really is not enough time to make them that quickly and we do not want to keep people waiting for their shuttles for months on end.  Jane will announce when the next batch of shuttles are going to be put in her shop. Different woods are being added all the time so there will be a wide variety of choice, you just have to be patient! 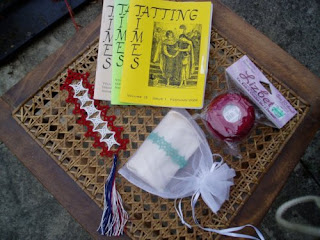 To prove that people do win "giveaways" this is a picture of what Gina sent me when I won her giveaway which was to celebrate the 4th July, my birthday - oh sorry American Independence Day.  Thank you Gina for your generosity particularly as I was only expecting a bookmark!

I will announce the winner of my 100th Anniversary Giveaway on Sunday in the meanwhile please keep your fingers and toes crossed!
Posted by Sally Kerson at Wednesday, July 28, 2010