I made these angels about twenty years ago, the pattern is in a tatting book that was basically the only one I used at that time as it contained, what appeared to me,  such very modern designs. How life has changed in the tatting world.   The book is called The Complete Book of Tatting by Rebecca Jones.  The sad thing is that these angels will have to be thrown away, they have gone yellow, probably because I used sugared water to stiffen them, all I knew in those days, and they are a bit worse for wear.  Also I think they are having a 'bad hair day!' Not to mention the the loss of one eye. 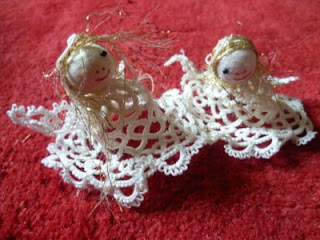 I can't stop tatting Martha's snowflakes but think they do look better without beads. 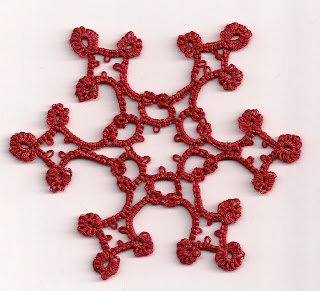 Or may be not! 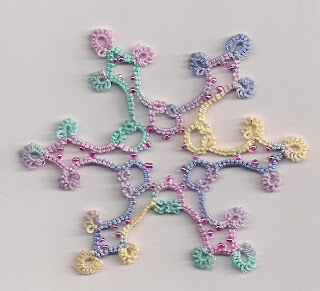 Had a really nasty cold last week so have a lot to catch up with, including finding some angels for a Scout Carol service (no not tatted angels or one eyed ones!) sorting out some carol singing and readings for Thursday evening in accommodation where some elderly people live. Also compiling a service for  Sunday morning entitled 'Hanging of the Greens" which I believe is more common in the USA, we have never done it in our church before.  On Saturday I am going to find some holly and other greenery and in the service encourage the congregation to make some decorations for the church - wish me luck it is going to be a busy week!