Necklace and progress on Font

My first attempt at a pattern from Marilee Rockley's book Tatted Jewelry which Sue Anna kindly sent to me.  The aim was to start with a pair of earrings, but instead I went straight to the necklace featured on the front cover called "Newcastle Necklace" I was intrigued at the name of this necklace as we have a city of Newcastle in England, perhaps Marilee can tell us what prompted her to name the necklace as I am sure it had nothing to do with England.  I think I might rename mine "Celtic Dream" only because the charm looks celtic and of course it is green for Ireland.  Actually I had little choice on the colour as apart from some HDT which I am saving for the other necklace in the book, I only had green in 10 that was usable, the border was the combination of two threads.  The charm was also the only one I had in my stash so hopefully it does not look too out of place. 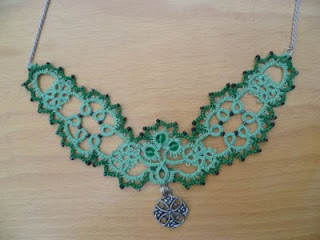 As promised this is the progress on the font, designed by us, we had the plans drawn up for it by a qualified architect.  They were then submitted to the diocese and had to be approved by them with a proper signed and sealed document.  Before this final approval was given a notice was posted in church for a period of time so that if anyone has any objections they had a chance to put them forward.  There were no objections so work has commenced. 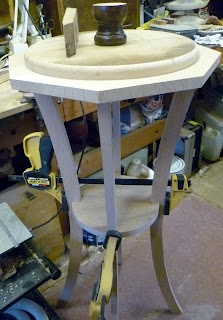 The font was going to be made out of this mahogany originally purchased for coffins but there was a change of plan which I will explain when the font is finished as it has a lovely story behind it. The piece of wood you can see on the top is going to be turned into a knob for the lid, it has nothing to do with the other wood as it comes from a table leg!