The latest from the garage!

Yes well it is obvious we don't keep the car in our garage!  It is, as most of you know, used as a carpentry workshop.  The next batch of shuttles are now being packaged and will be winging their way to Jane's very soon.  But first I wanted to let you know that there are a few slight changes.  The first you may have guessed by looking at these two shuttles, the photograph rather gives it away. Can you see the difference? 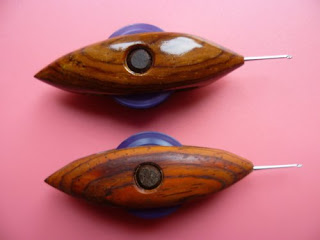 The second is, instead of the hooks having 'wooden hats' they have plastic caps.  I have to say these plastic caps are very strong and certainly not flimsy so should last a long time and what is more they fit very neatly onto the hook. 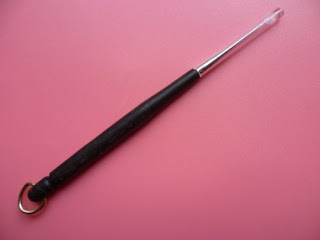 One of the interesting facts about the latest batch of pop-a-bobbin shuttles is that the 'pushers' - as we call them are all (with the exception of two) made from the oak that orginally came from the underneath the altar at one of our churches. The wood was then made into the font you will see in this post.  So it is extremely old wood and rather holy!   When I took this photograph I had no knowledge of this fact, so pleased I did as by the time I was told they were being dispersed into packets! 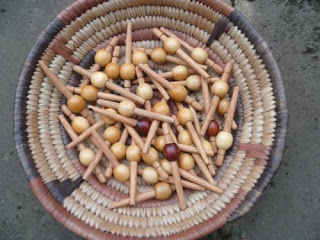 There are various woods in the latest batch of pop-a-bobbin shuttles to choose from, but there are no hook less ones.  We ordered 40 dozen hooks from Japan, they have arrived in England, but before we receive them we have to pay £130 to release them due to customs and excise duty and also Import VAT, this was a nasty shock but we have no other choice when it comes to getting a regular supply and the quality of these hooks has been much better than the ones we previously purchased in the UK.   I will let  you know nearer the time when the shuttles and hooks will be going into Jane's shop.