This month the pop-a-bobbin shuttle is celebrating its ten year anniversary. The design is far more streamlined than the original version and most shuttles are oiled instead of varnished. Also the hooks are now bought from Japan and then cut to size.  Production of the shuttles does not happen that often, mainly due to other commitments going on in our lives. We still get lots of enquiries and try to honour most within a span of three months.
The prices have also remained static and so we are going to have to raise them next month, not only to reflect the rising cost of materials but also the new packaging. 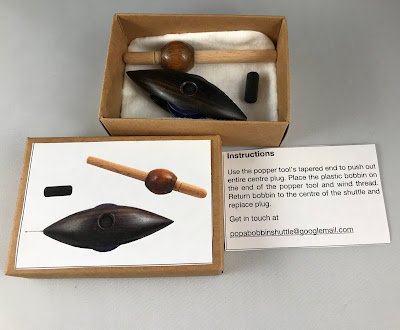 Instead of putting the shuttles into plastic bags, we have decided to use a cardboard box so reducing materials that cannot be recycled.  However, I think you will agree the packaging looks far more professional and enhances the workmanship.