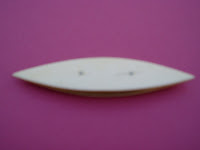 I won two shuttles on e.bay last week (yes still can’t break the habit!), they were being sold by the same person but with four days between listings. The first one is a Vintage Bone tatting shuttle 10 cm in length, 2 cm wide and 1cm in depth and described by the seller as “lovely to work with even though a bit larger than average. It is very comfortable and smooth in the hand.” She went on to say “a little stiffness in the fingers prevents me from using this shuttle now."
It certainly is a larger than normal shuttle. 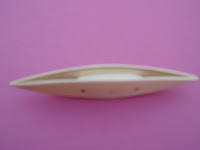 Sad to think that as we get older ailments such as stiffness in the fingers may prevent us from tatting, hope that is a long time coming for me. Another comment that was made by the seller was this "The top view shows a tiny mark that is in the bone itself. The other side shows small very fine hairlines where the pins are. This has been like this for a very long time and has occurred through natural use over many years." A well used shuttle, that is what I like to hear! 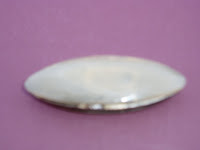 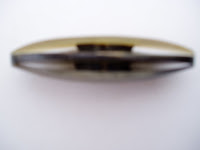 The second shuttle was described as a horn tatting shuttle – double thread with two shanks for winding two threads. Again she says “Shuttle has nice tight ends, smooth to the hand when in use”. I have never seen a double one before and trying to think when it would be most useful.
I was quite pleased with these purchases as they were both under £5 each and will now go into my collection although I might eventually find a use for the double thread one. 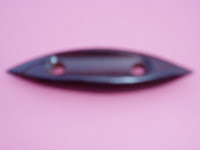 I am trying to motivate my husband into making tatting shuttles, he made this one for me years ago, can’t remember where the design came from but it was definitely copied.
Obviously the classic design would be better and as he has some small pieces of hard wood stashed away, they could be re-incarnated into tatting shuttles!
Posted by Sally Kerson at Tuesday, October 20, 2009