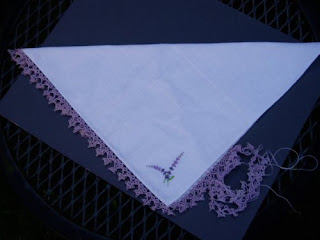 This is all I remember of the old nursery rhyme, but apparently it has more verses.
Lavender is one of my favourite plants, it smells beautiful and it is also so versatile. I've used it in cooking to give a unique flavour to biscuits and ice cream and of course in lavender bags to keep away moths from vunerable clothes.
I started tatting the edging to the handkerchief whilst on holiday, taking some ancient cotton with me, I began to sew it on as I wasn't sure if I had enough cotton and sure enough I didn't and there was no more. This was a real blow as the colour matched the lavender motif. I was making it for a elderly lady who said she so liked to see lace/tatting around a handkerchief. 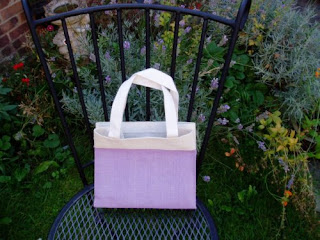 Enter this bag, which I found in a charity shop, not a particularly wonderful bag, a canvas bag, but not wishing to just discard all the hours and hours of work I had put into the edging I attached it to the bag. 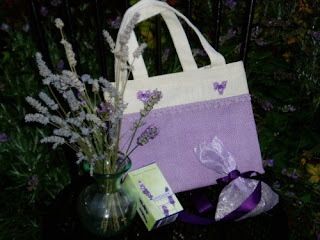 Here is it finished, although you will have to enlarge the photograph to see the transferred edging!


In my youth I used to associate the smell of lavender with "old ladies", they would very often use lavender toilet water (popular in England from 17th century; prepared by distilling freshly picked lavender that had been immersed in alcohol). Now lavender is back in fashion, and in an age of stress and depression it is often used to calm us down. Bathing in lavender oil, using a lavender pillow are all suggested to relieve tension and anxiety. Lavender oil can also be used in a massage, or in an oil burner to fragrance the room, the possibilities are endless. I even have lavender wax polish, finding time to actually use it is the problem!

It is said that planting lavender around the house will help deter evil and protect the people within the household.

The Romans introduced lavender and its uses into England and Europe. They used the flower heads in their communal baths not only for their fragrance but probably also as an antiseptic. The ancient Greeks are also thought to have used lavender for treatment of throat infections and chest complaints. A month ago there were purple fields of lavender to be seen in England and they looked beautiful in the sunshine.