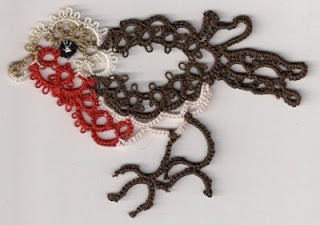 Over the next few posts I’m going to show you three different birds, all I have tatted and all have a story behind them. To start with is the Robin. We associate this little fellow with Christmas, he pops up on many of the cards we send and receive. Robins on Christmas cards are usually surrounded by snow and to make the picture complete a sprig of holly is often seen.

The pattern for this little robin was in a Ring of Tatters magazine some years ago designed by Anthea Rowley. After I made him I immediately gave him away to someone named Robin and had to borrow him in order to post this picture.
I couldn't tat him again as I only saved half the pattern! The instructions say to sew white cotton for the eye, although if I ever have the opportunity to make him again I would use a bead for the eye.

There is a legend that the robin plucked the thorns from the bloodied head of the crucified Christ and so earned his red breast. In the 19th century people in England called their postman Robin because the ‘posties' uniform was a bright red waistcoat. Early Christmas cards show Robins carrying envelopes in their beaks or knocking on doors.


This particular robin is a regular visitor to Robin’s garden. 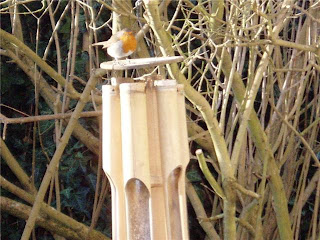 This Christmas Card was made by someone as a thanks for a pair of tatted “toothbrush earrings” that I gave her. Somewhere in my home is the same pattern, which is supposed to make a card, but I only managed to sew about a quarter of it, after that I was bored, tatting is much more fun! 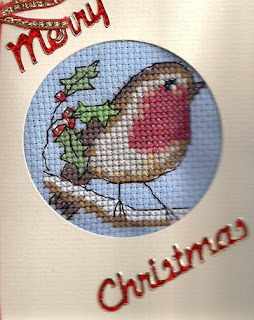 There is also an old English folk rhyme entitled "Who Killed Cock Robin" although it is believed to be talking about the legendary Robin Hood. Here is the last line of it "All the birds of the air fell a-sighing and a-sobbing, When they heard the bell toll for poor Cock Robin." Ah!!!!
Posted by Sally Kerson at Friday, January 15, 2010