A tale of two woods

There has been great excitement here in the last few days and we are in "wood heaven".  I admit not everyone gets excited by wood, but when there is an "Im in the garage" to please,  then it is a good enough reason!  The first bit of excitement was learning that a piece of Oregon Myrtle kindly sent by Karen had cleared the dreaded English customs and was on its way to us.  The other was discovering when walking home from work yesterday that a tree just around the corner was being cut and it was an English oak.    My first instinct was of course to ask the men felling the tree if I could take a piece, and yes I was allowed, but obviously I could not carry much.

The tree looked like this yesterday after its massive prune, it definitely had had a "bad hair day" or a "close shave".

When "Im in the garage" returned home from work we went out in the freezing cold and dark to gather a few more choice pieces from the huge selection.  It felt as though we were thieves in the night dressed up with hats and gloves and carrying a torch, there was no vehicle access either unless you went over a field, by some houses, not advisable.

Anyway we manage to get two more pieces and put them in the garage for fear of the frost which could have split newly cut and damp wood.

Back I go this afternoon to see the latest on the oak tree and sadly it had been chopped down, and here is the stump to proof it.  What a sad sight. 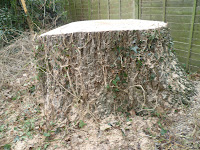 I then had an interesting conversation with the men who were felling it, who must have thought this is a crazy woman interested in a tree!    I did find out why it had to come down and the reason is this, it had  fungi growing around it which was killing the tree. It would have taken a long time to do but as the tree was near some houses they could not risk branches falling on them. 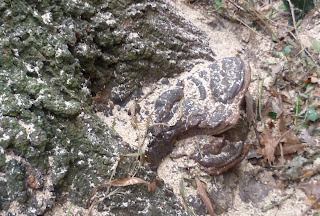 All the wood is going to fuel a power station, but they said that there is no danger in using bits for wood turning, or obviously shuttle making. but it would be impossible to explain what a tatting shuttle was to these men, so I did not try.

This morning I went to collect the Oregon Myrtle which Karen had posted from of course Oregon, this meant carrying it quite a way to where the car was parked as they had closed the road due to re-surfacing, so over the last 24 hours I seem to have done nothing but carry wood around the village. 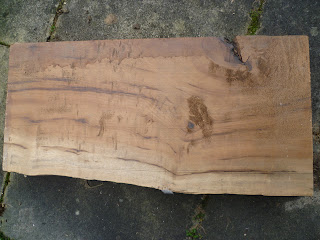 Just look at the grain on this piece, apparently the different minerals in the soil cause the different colours. Whatever stress the trees have undergone influences the configurations too. Oregon Myrtle wood is used for many things but one prime one is musical instruments, well I can tell you it is music to my ears at the moment!

Thought I would show a little bit of tatting and to also add a bit of colour. As you can see Jane and I have been talking over the internet again, and she let me have the pattern for her latest cute little heart. 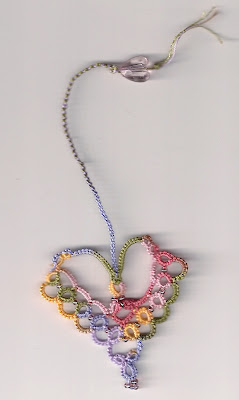 I have only managed one so far but go over to her blog and you will see many more.