On first seeing the Troll Doll pattern in Martha's book I was immediately transported back to the 1980s, a time when Trolls were very much in fashion.  They seem to have made a bit of a come back since the film Trolls was made last year,  but not as much as in the past. The reason is possibly because there are so many others toys and characters to compete with these days and the film Frozen had a great following.  Here are my two troll dolls, they were such fun to make, thank you Martha. 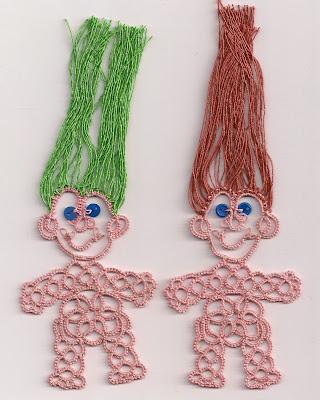 I found these two trolls which are really pen tops, they must be at least 30 years old, I seem to remember they came free with breakfast cereal but not absolutely sure about that. 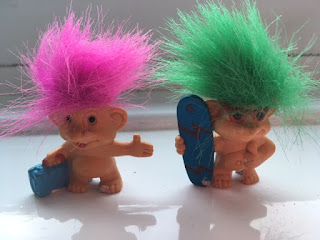 From searching on the internet the story is that Troll Dolls were originally created in 1959 by a Danish fisherman and woodcutter called Thomas Dam.   Dam could not afford a Christmas gift for his young daughter Lila and carved the doll from his imagination. Other children in the Danish town of Gjøl saw the troll doll and wanted one.   So from wood they have can now be made from thread, how clever is that?
Posted by Sally Kerson at Friday, January 13, 2017