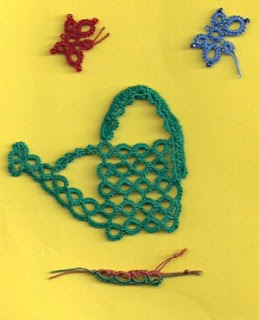 My garden has just started to get it's Summer clothes on, the Spring flowers have disappeared for another year and the young annual plants are trying to make their way into the world. But there is a certain pest that I'm having a battle with at the moment as it keeps eating whatever tender young plants it sees. Yes its the slug! I've tried slug pellets, now I'm attempting to get them high on coffee. Apparently slugs actually "froth" after eating their fill of caffeine which acts as a stimulant even to these little creatures and they slither away on a high! So I just tip the dregs out of my cafetiere onto the garden where the young plants are and "hey presto" the slugs then have their cuppa! There are other methods of reducing slugs, such as filling a container and sinking it in the ground filled with beer, but I think that's a waste of good beer!
As you can see Sid the Scintillating Slug is slinking by the watering can and a few butterflies fly overhead, all designed by Jane. I did go a bit wrong with this watering can, which is why I found it buried amongst some other odd bits of tatting, that I just couldn't throw away!

Talking about odd bits of tatting, I also found, what is supposed to be a dove amongst my bits and pieces. I originally designed and made a few of these doves for some confirmation cards, but didn't really think that the result was good enough, so as tomorrow is Pentecost Sunday I've added a few tongues of fire!
Posted by Sally Kerson at Tuesday, May 26, 2009