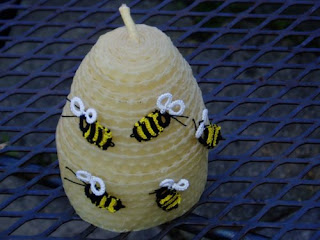 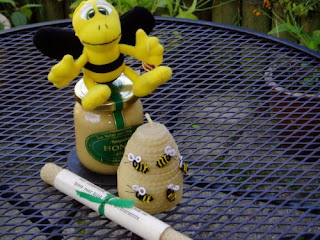 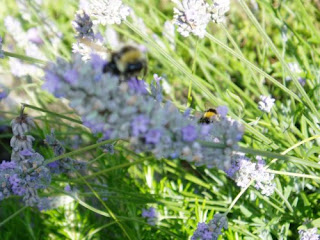 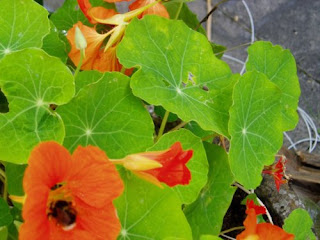 On the news today here in Britain we were told to encourage bees into our gardens by putting out water flavoured with sugar. The honey bees in the UK need an extra bit of help as 40% of them have been lost in the past four years and the number of species of British bumblebees has halved since the 1950s. The bees have been leaving their hives in droves, resulting in a serious drop in honey production. Apparently this is happening all over the world. We should be alarmed by the bee’s decline – after all, the honeybee account for 80% of all pollination so food production could be seriously damaged.
Now I have a friend who loves bees, she talks to them and when they land on her she even strokes them. She is a church flower arranger so obviously is used to the little critters!
I tatted some "Itty-Bitty Bumble Bees" from Martha Ess's book "New Critters on the Block" although I've had the book for ages this is the first time that I have ever made anything from it. Mainly because I thought I wouldn't understand the patterns - sorry Martha that's no reflection on your designs just that I'm so used to Jane's!
The bumble bees are pinned to a bees wax candle. I then decided to chase the bees around my garden and next doors (who came out to see what I was doing!) and these pictures are the results. You can just about see a bee in the natursiums and a few on the lavender. They were extremely difficult to photograph as they were so busy collecting the pollen.
There is also a picture of the mascot for the local Air Ambulance, they use a Bee because their call sign is "Alpha-Bravo" ABee! He is sitting on a jar of local honey, there is also another bees wax candle which came from Ireland, the smell of the wax is beautiful, I wish you could smell it!
Posted by Sally Kerson at Tuesday, August 11, 2009