All the tatting shuttles that were delivered last weekend to Jane have now been sold, it's incredible how fast they went, so it is time to make some new ones. "Im in the garage" has been buying wood off e.bay, exotic woods that will look very beautiful when made into shuttles. But there is a little story behind the wood you see below, it has come from America and is cocobolo rosewood and purple heart. 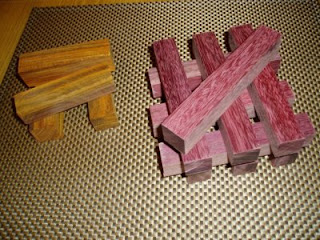 After it was ordered and paid for, the person in America sent an e.mail to say that he was sorry but he had been rushed into hospital for emergency surgery but would post the wood as soon as he could. So we thought, the poor fellow must have had an appendix removed or something like that, so we sent our good wishes for a speedy recovery and said there was no hurry for the package to be sent. However, in due course the parcel did arrive, sadly not in a very good state, the Royal Mail had put a polythene bag around the original package and our first thoughts were, have we lost any of the wood? Delivery was also delayed to our home as we were away visiting family when it arrived on Saturday. In the meantime another e.mail was received from this poor chap to say that the reason he was in hospital was that he had cut his thumb off whilst using the table saw! Yikes!!! No the thumb wasn't in the package, he had it sewn back on again, hence the emergency surgery! And no there was no blood on the wood either! And yes all the wood was enclosed in the re-formed package. 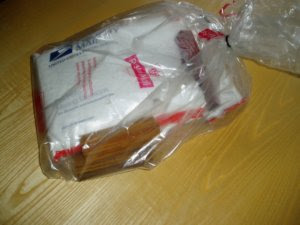 But this wasn't the first consignment of wood ordered on e.bay. I received a phone call two weeks ago from someone in England who had posted a parcel to us, it had arrived safely to our home and was ready to be opened by "im in the garage" when he returned from work. However, this fellow asked if I wouldn't mind opening it because he thought he had sent the wrong item! Too true! When I opened the package there were these plastic strips! Apparently he normally does the cutting and leaves the admin work to someone else, but they were away so he had to do it himself and sent our wood to the person who was meant to receive the plastic. So the fellow who received the wood forwarded his parcel onto us and we sent ours to him. But these bits of plastic were so pretty I almost kept them! 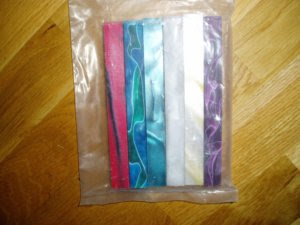 Now here is the vast collection of different woods ready to be made into shuttles, there are about 17 different varieties of wood in this picture some are English woods and others are woods that originate from other parts of the world. 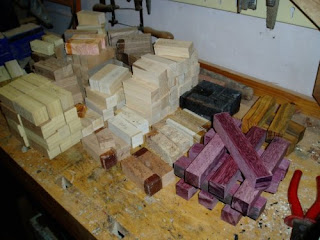 So the excitement grows as we all wait to see how the exotic woods will look when made into tatting shuttles, I think its time to put my order in!