Today is Shrove Tuesday the day that we make and eat pancakes to symbolise the using up of the food supplies in our home, ready for the penitential season of Lent, which starts tomorrow Ash Wednesday. Shrove is taken from the old English verb shrive, meaning to obtain absolution for sins. It is also quite common on this day to have pancake races, with groups of people running along the street with frying pans and tossing the pancakes as they run. 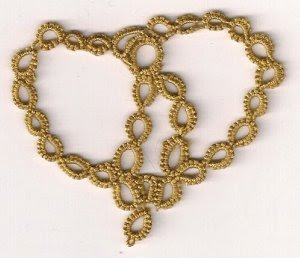 No this is not a tatted valentine heart gone wrong! It is supposed to be a pretzel. Pretzels I discovered have a deep spiritual meaning for Lent. In fact, it was the ancient Christian Lenten bread as far back as the fourth century. In the old Roman Empire, the faithful kept a very strict fast all through Lent: no milk, no butter, no cheese, no eggs, no cream, and no meat. They made small breads of water, flour, and salt, to remind themselves that Lent was a time of prayer. They shaped these breads in the form of crossed arms for in those days they crossed their arms over the breast while praying. Therefore they called the breads "little arms" (bracellae). From this Latin word, the Germanic people later coined the term "pretzel". 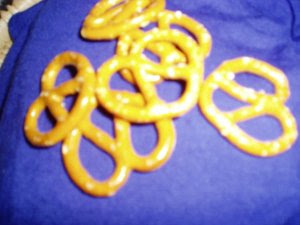 So in church on Sunday I gave every one a little bag of pretzels tied with purple ribbon, the real ones not tatted ones! Of course Sunday coincided with Valentine's day so may be I should have tatted them all hearts! 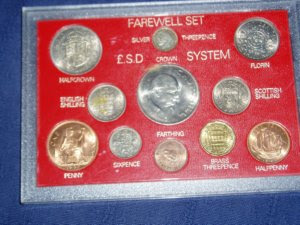 Now it was forty years ago this week that we here in England said goodbye to our beloved £ s d.
Or pounds, shillings and pence. Here is a farewell pack, to remind everyone of the days when there were twelve pence in a shilling. Which leads me on to say that Lent consists of forty days and forty nights - a time when people choose to give up something for Lent, like wine or chocolates and give the money they would have spent on these luxury items, to a worthy cause. Other people take on more tasks during Lent. All I can say is that in our house we will still be eating, milk, butter, cheese, eggs cream and meat during Lent! After all 'im in the garage' needs them to give him energy to make more shuttles!