After a few disappointing and frustrating set backs with the design of a wooden shuttle that would have a removable bobbin and did not involve too many complicated parts, we have now come up with what we believe is a unique and clever idea.

Here it is prior to being assembled (with an extra plug). The bobbin is placed in position and a plug is pushed through the centre hole of the shuttle and through the bobbin. To remove simply use the popper tool on the left of the picture to push out the centre plug and listen to the pop! 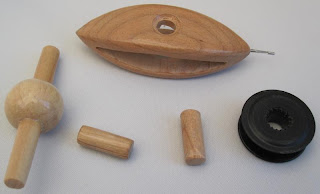 The popper tool is tapered at one end in order to push out the centre plug. The plastic bobbin can be placed on the other end of the popper tool to wind thread.

The hook on the end of the shuttle is also handmade from stainless steel. 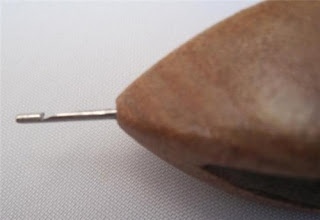 It is hoped that those who use this tatting shuttle will find it comfortable and practical to use, especially as there is a slight indent for your fingers in the middle.

I wanted to show you this shuttle earlier but due to the extremely bad weather that hit England working on them became impossible, and then of course Jane and myself needed to test them.

Many of you prefer a shuttle with a removable bobbin, as it easier to wind/unwind and usually holds more cotton However, my shuttle maker (aka husband) can make post shuttles but he is at the moment concentrating on these bobbin ones.

Again some of you do not like a hook attached to the shuttle, there will be some that will be made without hooks, don’t worry – just let Jane or myself know if that is your preference.

You may be wondering how you can purchase one of these shuttles - well 10 of them are at the moment winging their way to Jane’s home via the British postal service and as soon as she receives them they will go into her Etsy shop, hopefully before the end of the week.

The shuttles are being made in a variety of British woods, which include elm, cherry, walnut, ash, sycamore and cedar. We are in the process of buying some exotic woods such as ebony and iroko to make them from but obviously these will cost a little extra. I will show you one of them in a future post.

The shuttle is to some extent modelled on the Aero shuttles, but of course with the wooden plug in the middle there is no clicking sound!

As some of you will have already realised my husband is a very talented woodworker so this is a really good way of combining our talents, and with the invaluable help of Jane, who passed on her suggestions during the project we hope that we have come up with a shuttle that will be a faithful friend to the many tatters around the world.

You all should know by now that Jane is my sister, we were both taught by our grandmother to tat when we were children, Jane being a little older took it more seriously than I did at that time. I've only come back to tatting with renewed energy in the last 10 yrs, so have lots of catching up to do!
After this post I'm sure we can rightfully be called "The Shuttle Sisters"!
Posted by Sally Kerson at Sunday, February 07, 2010