Someone I know enjoys receiving anything that I have tatted, and furthermore keeps on at me to start tatting classes, but I have never been able to get around to organising any, even though she is not the only one to request such a thing!  Anyway she really wanted a pink butterfly for her daughter.  I looked for a suitable pattern but could not find one that would fit nicely into a frame.  Jane then suggested one of her patterns, however, she thought before I tried it that it would need a "make-over" which she duly did and you can see it on her blog here. 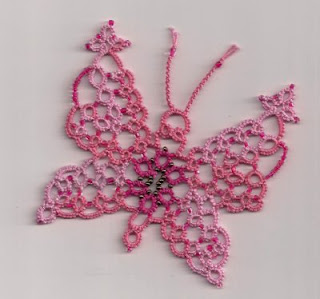 She also asked me, along with others, to test tat it. Now I have to say that I am so used to her patterns and just following them without any trouble, so the thought that there could be an error, really, really frightened me.  What would happen if I found it?  Would it mean me having to write something on her pattern?  How could I  possibly tell her that I had found an error?  Goodness me what a responsibility.  Well I have test tatted this little beauty, and here it is, not telling you if there were any errors in the pattern though!!!
Posted by Sally Kerson at Monday, August 29, 2011