Today is one of those rare combinations with all the ones in the date.  It is also All Saints Day in the church calendar.
Yesterday though marked 60 years since the introduction of zebra crossings in the UK   The first appeared in Slough, Berkshire, in 1951. However, more than 1,000 have been removed over the past five years and the threat of them going altogether has just been announced in the news.  Some have already been replaced by more sophisticated alternatives with lights and flashing signs.  The number of deaths on the crossings has doubled since 2007, in part because of a growing reluctance of drivers to stop at them, which they are supposed to do when they see a pedestrian waiting or actually stepping on to the crossing.
So let me introduce to you a piece of Zebrano - otherwise known as Zebra wood. This wood was recently purchased to make more pop-a-bobbin shuttles from and it is still in this state so I cannot show you any yet.    The stripes in it are very distinctive.  As you can see the ends of the wood are a different colour as they have been waxed.  The wood originates from Central Africa but we purchased it from a wood supplier in the north of England. 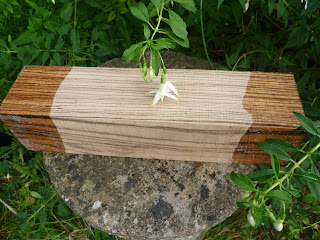 One of the most famous zebra crossings in the world is probably the one that appears on the Beatles Abbey Road album.  And yes we do have the LP -  here it is, not thrown out in the latest clear out! 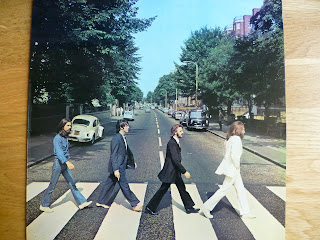 This particular zebra crossing in London was given a Grade II listed building status (of historical interest) by English Heritage in December last year, so it should therefore be safe, indeed it is a tourist attraction.

Today's date as a zebra crossing! 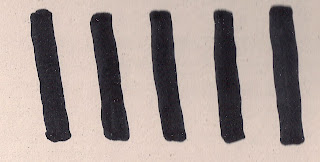 Hope you have been over to Jane's blog to give your opinion as to the time of day the latest pop-a-bobbins should be listed.