The Clocks go back tonight

Before going to bed this evening we in the UK are required to put our clocks back one hour, which means an extra hour in bed, great!  The British Summer Time Act of 1972 stipulates that GMT begins on the last Sunday of October and BST on the last Sunday of March (when the clocks go forward an hour).  However, there is talk of a trial period with a view to eventually adopting a Central European Time, which would mean BST plus one hour in summer and GMT plus one in winter - confusing us Brits even more!  The main problem is that those in the north of the country, particularly Scotland, would definitely not relish an extra hour of darkness in the winter.  Between 1968 and 1971 the government carried out the same experiment but was forced to end it after complaints in Scotland and northern England.   So we await to see what happens.  In the meantime the pop-a-bobbin shuttles arrived this morning at Jane's and she is wondering at what time to list them, and might need your help with this, taking into account the different time zones across the pond.

I have managed some seasonal tatting, Martha's pumpkin teapot and might even get around to doing some more tatting if time allows, with an extra hour coming up, who knows?! 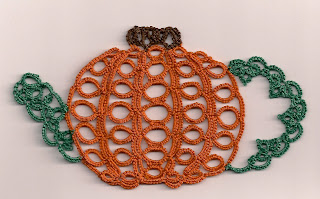 I just have to show you this little chap.  It is an alarm clock purchased when my eldest son was young in Germany.  It has travelled a bit and was found in a box in the attic, minus a leg, but a week or two later when we were sorting through my son's belongings the missing leg was found! 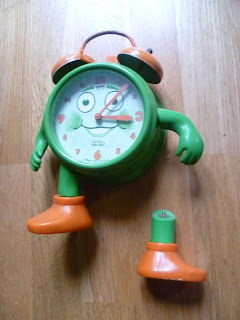 Here is a Ticki Tack clock on youtube although the one we have is not battery operated it is a wind up one - but I was thrilled to find it.  Enjoy!!


It is good to see both his legs working!