Instead of my button supply decreasing I seem to have acquired many more recently, so in order to put them to good use, other than tatting of course, I made a picture out of some of them.   The frame was in my parents house and my mother had put dried flowers in it, but they were faded and so when my father died I acquired the frame.  When removing the contents I found it was quite an old frame and there was a nice gap between the glass and the back board.   This photograph was taken before the glass was put back to avoid reflection. 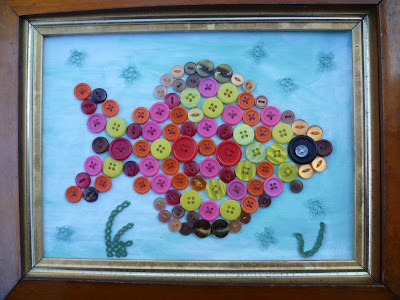 I wasn't sure about adding the tatting but in the end decided that it enhanced the fish.  Every button is sewn on, I thought this was better than gluing them so that if any had to be repositioned (which frequently happened) they would come off easily.  For the background I used some calico material which is of a reasonable thickness and then painted it.  I would like to make more of these pictures, but probably not so large. Also next time I will probably use a frame without any glass as they are quite bulky so will not always accommodate glass.

The pattern for the thistle is now on my blog.  Today I received a lovely note from the hostess of the Burns Night  thanking me for the thistles, this is it showing the house where the event was held. 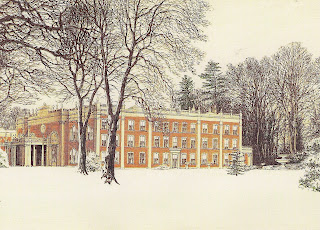 As you can see there is snow in the picture, we may be having some of the white stuff coming our way very soon!
Posted by Sally Kerson at Wednesday, February 01, 2012