This year marks the bicentenary of Charles Dickens who was born on 7th February 1812. One of the many books he wrote was Oliver Twist about a poor orphan boy in Victorian England.  Probably the most famous line from the book is when Oliver asks for more gruel and says "please sir, I want some more". 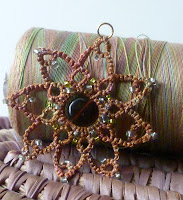 So it was with some amusement that I walked in to a charity shop this month and picked up a reel of machine thread called Oliver Twists, for it just reminded me of this character which Dickens portrayed so vividly in his book.  By adding some brown fine sewing thread it became a bit more manageable but sadly the original colours disappeared.  The star motif is Janes and can be found here.
Next I tatted it with a turquoise colour size 60 Coats thread.

This is the Canopy Bookmark from Martha Ess's book Playing with Picots, I thought it looked complicated to tat but was amazed how easy it was and what such a lovely effect. 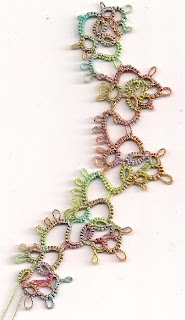 And finally the thread bare without any additions, using another of Jane's patterns
called Oh so simple edging  as Oliver Twist said "please sir I want more!"