It is back to normal daily and weekly routines after returning last night from our visit to Singapore and Malaysia.   I woke up too early this morning and have not re-adjusted to English time yet. However, reality is setting in as the washing machine has been on the go and food shopping is the next chore!
We were in Singapore to attend my son and daughter-in-law's wedding banquet.  The butterflies that I tatted to go with the wedding favours were a great success, however it was announced at the beginning of the banquet that they were 'embrodiered' but called 'tatting'!   Obviously at that point in the proceedings I was unable to stand up in front of everyone and explain how they were made. One guest has subsequently contacted my son asking about the tools that are used to make them.  Someone else e.mailed him with a photo of two of them sitting on the table saying that they were so beautiful, and here it is. 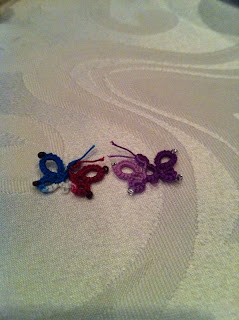 Before the banquet was held there were a few Chinese traditions that my family were involved in. One of them is the giving of tea in the morning. I don't have a picture of myself taking part in this event, as apart from the official photographer there was only me taking photos. 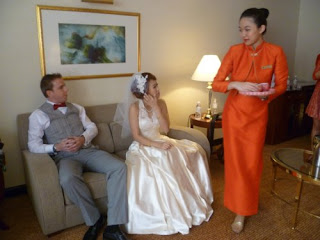 This is my other son, serving tea to the couple. 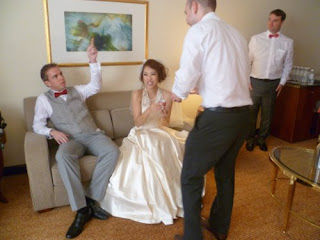 I have yet to sort out all the photographs that have been taken whilst on this momentous trip to the far East.