Today marks the Autumn equinox which happens when the equator passes the centre of the sun. This is when the north and south poles of the Earth are not tilted towards or away from the sun, as at other times, but are aligned so as to give, theoretically, the same amount of daylight in both of the Earth's hemispheres.

Is it Autumn or Fall?   Many would say that 'Fall' is an American word used to describe this time of the year whereas in England we say Autumn.  But the word 'fall' apparently was used in England during the 16th century or even earlier.  It was originally short for fall of the year or fall of the leaf but it commonly took the one-word form by the 17th century, long before the development of American English.  So while the term is now widely used in the USA, it is not exclusively American or American in origin.  What is more an old English word feallan means “to fall or to die.” Over time, the phrase was shortened to fall. “Fall of the leaf” 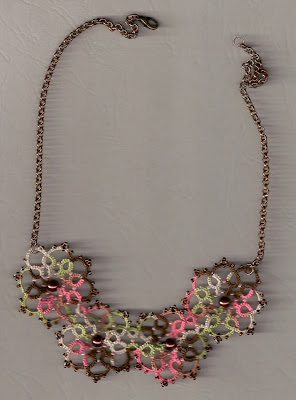 This necklace is a Ring of Roses bracelet gone wrong as I decided not to read the pattern, which was stupid as of course it went wrong! Although pleased that all the time and effort was not wasted, I gave this particular necklace away, really must make one for myself!