Tomorrow is St. Catherine's Day, she is the patron saint of lacemakers and as we tatters don't have our own patron saint, she is perhaps the one we should adopt, and so of course she gets a special mention in Tat's Heaven!

For lacemakers today was known as "Cutting Off Day" when they cut off and sold the lace they had made. Originally lacemakers would produce only one pattern, with which they had become conversant. This would have been worked in one continuous piece, the lace dealer would take the lace from each pillow and pay according to the length produced.

There were quite a few traditions in areas where lace used to be made. In the evening a lighted candle was placed on the floor and each girl would jump over it - if she extinguished the flame, then ill-luck would follow her for the rest of the year. The belief that flame could purify one's life and that by passing through fire then luck could be changed is an ancient one. 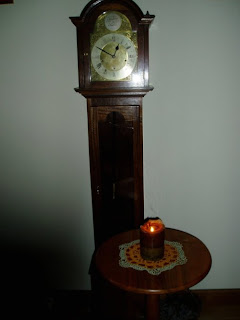 Kit be nimble, Kit be quick
Kit jump over the candlestick.
(lacemaker's rhyme)

Lacemakers also made "Cattern cakes" these originated in Tudor times by the Nottinghamshire lace makers who made them as part of the celebration of their patron saint day. A lightly spiced cake with a hint of aniseed. Their consistency is similar to rock cakes 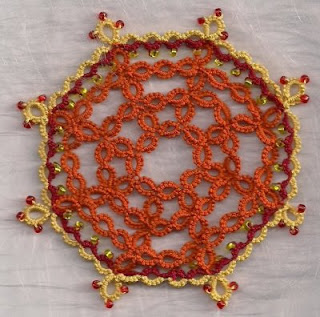 St. Catherine herself lived in the 4th century she was reputed to be beautiful and intelligent and of noble birth. However, she was persecuted for her Christianity and was tortured by being put on a spiked wheel and turned, but it broke so she was beheaded. The firework "Catherine Wheel" is named after her - a representation of it is shown above. I found the pattern in a old ROT book but of course changed it a little and added some beads to make it look as if it was on fire!
Posted by Sally Kerson at Tuesday, November 24, 2009