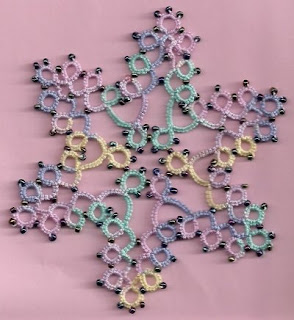 Before Christmas I was looking for a simple snowflake pattern to include with my cards. I found this one in Anne Orr's Classic Tatting Patterns and when working it for the first time I decided to add beads, with a very pleasing result. However, it took ages to make, particularly because the pattern is written one row at a time with continuous instructions in small print which made it hard to follow, then adding beads caused more problems! In the end I was forced to draw a diagram to help. It was clear though that this was not going to be a quick pattern to tat and even making it again without beads was still quite slow, although if I had persevered I would have become faster, but then Jane's butterfly pattern flew into the scene and I was smitten! 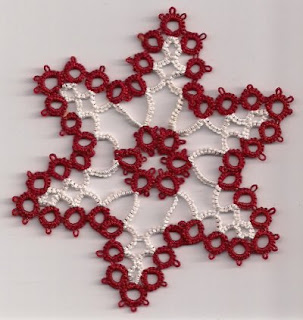 Just before Christmas though this delightful snowflake (below) arrived through my door with sparkling beads on, it came from Tatskool - thank you very much Pamela, the thread may be her own rasberry sorbet? Not sure, but it is very pretty. 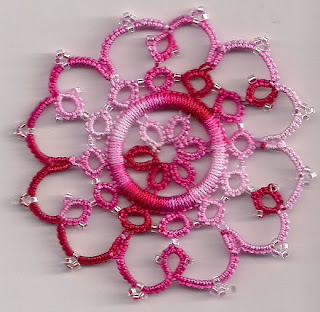 I have never taken part in any exchanges but have enjoyed watching those that have taken place, especially the "Secret Santas". It is good to see the generosity of all the tatting people and a little bit of the culture of the country they originate from woven into the gifts.
2010 is almost here..................................
What is your New Year's Resolution?
Obviously to find time to do even more tatting!
A HAPPY NEW YEAR to everyone
Posted by Sally Kerson at Wednesday, December 30, 2009