Today is the feast of St. Nicholas, although this bearded gentleman also goes by the name of Santa Claus or Father Christmas and is known for his red fur trimmed cloak. Yesterday we were treated to a Mummers Play in one of the churches. The Father Christmas you see in the picture is dressed in green, said to be a sign of the returning spring and he is known as Old Father Christmas, still quite a jolly fellow! His companions were St. George, a Turkish Knight, The Doctor and Johnny Jack. The origins of these English plays go back in the mists of time but are said to be pagan. However, I don’t think there is any harm in seeing them being performed in church .
After the performance one of the Mummers read out an interesting fact that had been sent to them (via the Internet). Apparently there is a painting in water colour in existence that shows Mummers performing in the late 19th century in the very village where this church is. The picture was painted by the son of a former famous village resident, so its good to see traditions revived especially on a dark, rainy cold December afternoon. 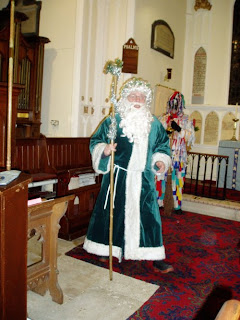 St. Nicholas was Christian Bishop of Myra, a seaside town in what is now Western Turkey in the early fourth century A.D. There are many legends about this bishop which have been passed down over the centuries and have probably been embellished and expanded far beyond the actual facts, though they may contain some elements of truth. St. Nicholas was very kind to children and has become their Patron Saint.
When living in Germany I well remember this day especially seeing a Father Christmas on the street giving sweets to the children. St. Nicholas is well respected, in many European countries. 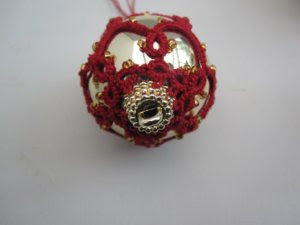 This is another picture of a Christmas bauble, this time in a Father Christmas suit! I am a little nearer to posting the pattern only the last few days have been very busy so I’m struggling to get it written down in a clear and concise manner.
Posted by Sally Kerson at Sunday, December 06, 2009