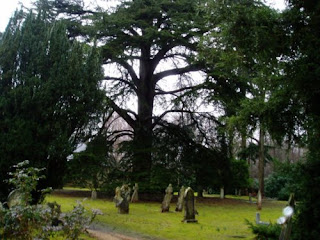 As you all must know by now, unless you have been on another planet! The Pop-A-bobbin shuttles are in full production and there are quite a few different woods they are being made out of, which I will try and list soon. Some woods we have bought locally and others have been purchased from overseas. Sharren Morgan asked for a cedar shuttle when the last batch were being made, and so far she is the only person to own one made out of this particular wood. The cedar tree that the wood came from is in these two pictures. As you can see it is very near to the church. About 18 months ago the tree had to have a huge branch cut off it because it was dangerously close to falling on the church and doing considerable damage, particularly as there is stained glass window that would have been badly damaged if it had fallen. One log of the wood was brought around by the Vicar for "i'm in the garage" this was before the shuttles were a glint in his eyes! 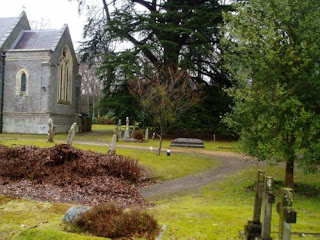 Now this particular tree is beside a church that used to have a Vicar who was very fond of trains, his son was born in this area and spent his early years here, he also took up his father's love of trains and became a clergyman himself. His name was Rev Awdry and he wrote the now very famous Thomas the Tank engine stories. So he would have indeed seen the tree and probably ran around it as a child. 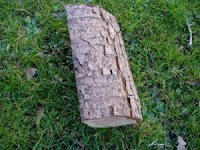 You might have noticed a few rain drops on the pictures of the church, I took them last Sunday, it was raining, very cold and I almost fell over a tombstone!
Here is a piece of the original log that was given to us.
It was seasoned out doors for a year and now is being
cut into manageable pieces.

And just to show you that the shuttles are progressing here are a few, I'm sure you can identify the ebony, purple heart and cocobola rosewood. 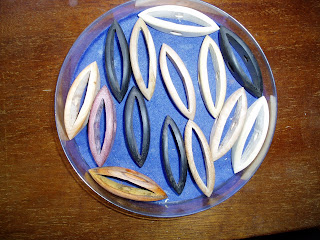 I have a shuttle that was made out of the old timber from the porch of another church, shown in this post, it is oak. There are a few more shuttles that can be made from this wood if anyone is interested? I have also brought home some yew wood taken from the tree outside this church and it is now seasoning. The stories behind some of the woods that are being used for these shuttles, are fascinating and makes them very special.
Posted by Sally Kerson at Saturday, March 06, 2010