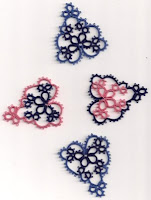 Tomorrow is Mothering Sunday and not Mother's Day which over the years it has come to be known as in the UK. Mothering Sunday has much earlier origins as a date in the Church calendar. It was a day when people returned to their “mother church” – the nearest large church or cathedral – on the fourth Sunday of Lent. As such, the date moves with the date of Easter, so can fall any time from the start of March to mid-April, which means if it was not for the commercialisation of the day few people would realise when it actually was! Despite its historical significance in the UK, it is now almost impossible to buy a card that says, “Happy Mothering Sunday”. Also on this day those who were in service, such as maids and living away from home, were given the day off and were allowed to visit their mothers, often bringing with them flowers that they had picked on the way.
As you can see I tatted some hearts, the pattern is called "Heart of a Butterfly" by Irene Woo. I have made some into bookmarks
The pink one on the right is made with 20 thread and all the rest are made in 40 thread. 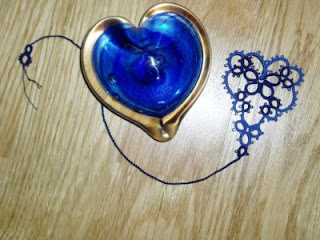 In America Mother's Day is celebrated on the second Sunday in May and has nothing to do with Mothering Sunday.
Now those who are waiting for their Pop-A-bobbin shuttle, just might see it in this basket!
Don't they look fabulous? Its fascinating to see the the different coloured woods.
I can also inform you that "I'm in the garage" has a new piece of equipment (boys and their toys!) and now is able to work the shuttles into a far better shape. 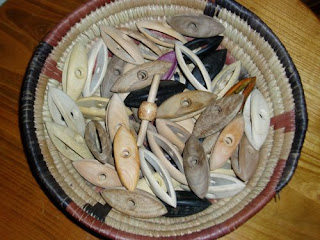 The other week a few of us went on a fact finding trip to some churches looking at modern stained glass windows as we are going to have a new one put into an old church.
This ancient font was outside a church and I just had to take a photograph of it. 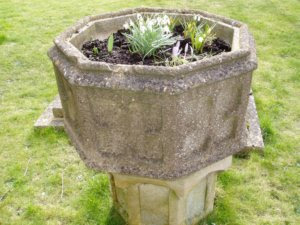 The font makes a very unusual flower pot and is just right for a celebration of Mothering Sunday and seeing the snowdrops peeping out is a reminder that Spring is on its way.
Posted by Sally Kerson at Saturday, March 13, 2010