It took me all week to tat Jane's chicken wing pattern, very apt for this time of the year, when we think of chickens, eggs and Easter! The pattern can be found here. I used some thread Jane gave me last weekend and combined it with some thread I had at home. It is a lovely pattern and I fully intend to work it again, but the trials and tribulations were not caused by the pattern, time was the reason I was so slow at completing it. No the trials and tribulations are caused by the "Pop-A-bobbin Tatting Shuttle!" 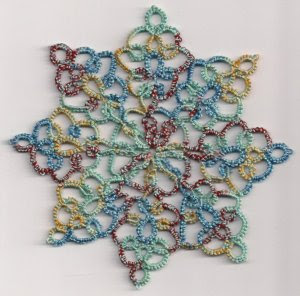 When the suggestion to I'm in the garage about the idea of making wooden shuttles was tentatively made last year, I never thought, nor did he, that it would be a project that would go quite the way it has! The first attempts to make a wooden shuttle in the Autumn didn’t go well and so it was back to the “drawing board” and eventually a shuttle has been produced that is proving to be acceptable to a lot of tatters. However, I thought it might be a good idea to publish a few posts on how all the different components and packaging have caused challenges, frustrations and problems since we started making these shuttles. So I've identified seven elements that go to make up the whole of the “Pop-a-bobbin tatting shuttle” each have a story behind them. Seven is a very biblical number, and occurs throughout the New Testament and Old Testament, but seven also reminds me of the film “The Magnificent Seven” But over the last few months there hasn’t been much magnificence when it has come to sourcing the different materials that we have needed!

So here are the different elements that make up the whole of the "Pop-A-bobbin tatting shuttle" in no particular order.

Again in no particular order I will start with

THE HOOK - which has caused quite a lot of conversation between tatters in the last few weeks. The first hooks that were made were literally just metal bent over and I said to “I’m in the garage” that they needed to be the shape of a hook. So he used his watch makers lathe (he repairs clocks). However, some people have found that they snag the thread, so he is now smoothing them off, or what he calls another “finishing process”. Our attempts to find ready made hooks have been exhausted for the time being so it seems that the handmade ones are going to be with us for a while.

This is the Watchmakers Lathe 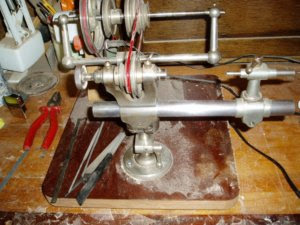 THE BOBBIN – on the original shuttle design we tried machine bobbins but found them to be bulky but worse still they were not flexible enough. So the only way was to use the Aero bobbins, however when we went to an English supplier and tried to purchase a few more than are normally required, we found that they were a little reluctant to let their stock go in one large order! Our next try was a supplier in America and for the first batch this was fine, they were very helpful and the consignment arrived in just over a week. Sadly though the next consignment posted took over three weeks and we had to pay customs duty on them which was quite a bit and made them very expensive. We have phoned manufacturers direct but they will only sell to their own suppliers and the suppliers will only sell to businesses and last week I was about to give up. However, Jane has spoken very nicely to a supplier and hopefully the problem will be resolved. The other fact we have found out is that there seems to be two different manufacturers making these bobbins so we have to be sure that the bobbin we supply with the shuttle is the correct one! 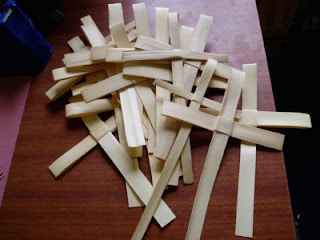 Today is also Palm Sunday and here are some of the palm crosses that were given out at church this morning. We are now entering Holy Week, so I guess the title to this post "Trials and Tribulations" are much more relevant to this coming week as we follow our Lord to the Cross.
Posted by Sally Kerson at Sunday, March 28, 2010