Martha Ess's new tatting book "Playing with Picots" arrived in the mail on Friday. So  I just had to make the angels for this bit of heaven. As Martha has called them 'Big Sister Angel and 'Little Sister Angel' I named them - well what do you think?! 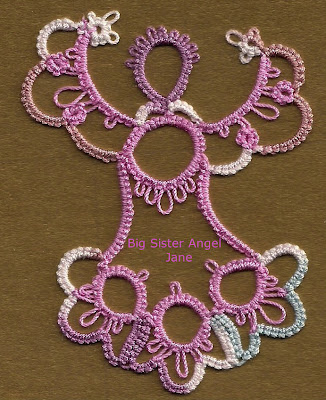 Actually Jane looks like she is dancing!  Well come to think of it I'm doing a sort of wiggle too! 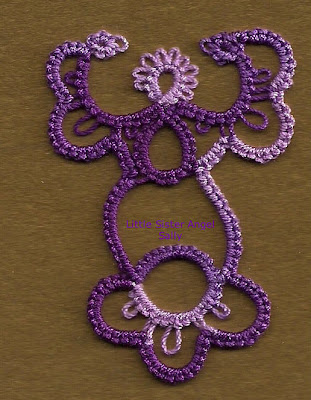 The book was waiting for me when I returned home after conducting a funeral service.  Before the service I spoke to the organist (a farmer) to confirm the music etc and learnt that the funeral director had asked him to play for this service after delivering a bull to his farm earlier in the week! The funeral director also keeps cattle. After the service another farmer who was in the congregation started discussing the price of lambs to the funeral director. But that was not the strangest thing about the funeral, apparently some people who attended the service found that they were at the wrong one.  They had read about it in the paper but there was also another deceased lady bearing the same surname and who had died at the same age 90 yrs in the same town and they had obviously read the wrong entry. Apparently they could not understand why I was referring to the deceased as Mary when they thought her name was Betty! This particular funeral service was in a church with a burial in the graveyard, whilst the one they should have been attending was later on in the day at the crematorium, so they had to sit through two funeral services on Friday!  So that is probably why I settled down to tat these angels after a bizarre day.

Martha's new book has many other interesting patterns, and I can't wait to try them out.

Thank you Martha  you are an angel!