It is not a good time for Ash trees in the UK at the moment, there is a disease that threatens to wipe them out,  or at least seriously diminish them.  You can read how the government are trying to tackle the threat of the disease here, some say however it is too late and measures should have been taken a long time ago to stop its spread.   In the 1970's Dutch Elm disease took hold in this country and over 25 million elm trees were destroyed by the 1990s.  There are some beautiful forests in the UK and particularly around where I live so I hope that this disease will be contained and not spread so widely as the Dutch Elm one did in the 20th century.

But on a more cheerful note we have a small stock of ash in the garage and this is one of the latest post shuttles that has been made from it. Can you see what an interesting grain it has?  The ladybird sticker was purchased when Jane and I were in the USA and one of the people we visited Pam Freck is particularly fond of ladybugs. 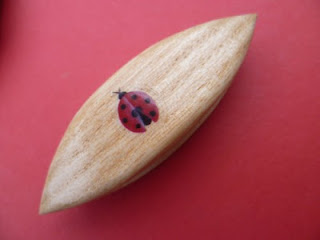 Now here is a reject pop-a-bobbin shuttle, it comes from this piece of wood blown down in the winds. The knots in the wood have caused a split inside, however instead of being thrown away it is stopping with me, even the sawdust sprinkled on it makes it feel like a bit of a reject though! 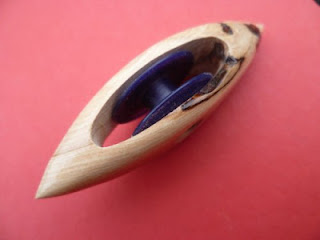 I intend to write out the Christmas bauble pattern that was shown in my last post (it differs slightly from the two I have already put on the side of my blog)  and also show how the  tatting is assembled on to the bauble when completed, just need to take some photos of the different stages. 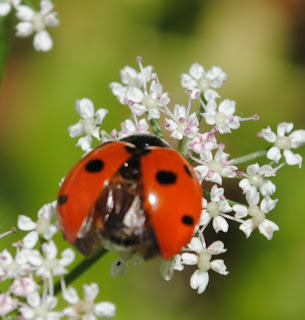 But I would like to leave you with this beautiful picture of a ladybird (ladybug)
Posted by Sally Kerson at Tuesday, November 13, 2012