Okay I'm not meant to be too serious in this blog post, instructions from big sister!  However, firstly you all need to know the meaning of the title 'Boxed Clever', well other than making tatted boxes!   It means to use one’s resources beyond conventional ways. Not necessary “thinking outside the box”, although this might happen but it is not quite  accurate.  Boxed clever or 'boxing clever', means not only thinking outside the box, but re-defining the common thought process itself . It’s the ability to evaluate the current thought process, and replace it with a new, more superior, more productive, more efficient thought process. Does that sound like Jane?! 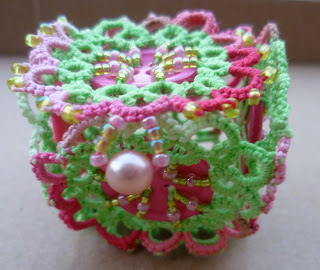 The pink and green box was my first attempt, there were a few issues when it came to the second side, Jane and I agreed to disagree on which way to turn the work!  She really was calling me 'a pain' at this point, or may be a 'daft mo'! 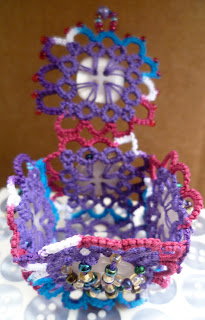 If Jane designs another pattern before Christmas I will scream, cards are not being written, sermons are not being prepared and as for housework, well what can you do when there is a thread invasion?
Posted by Sally Kerson at Saturday, December 15, 2012