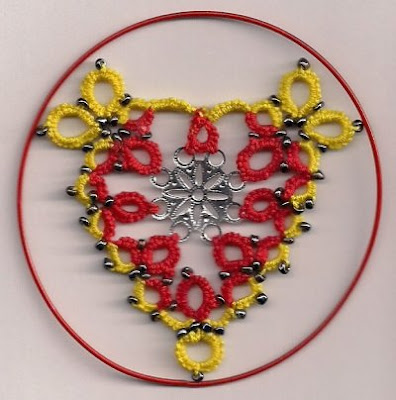 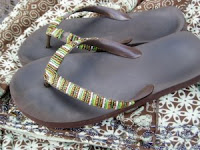 Before throwing things away into the bin, we are all encouraged these days to recycle, so whatever we do not want anymore can be used or recycled into something else. I'm sure we all do our bit to help the environment in this respect. Sometimes when I buy clothes I will notice the embellishments on them, particularly the buttons and think, um I could cut them off and use them for something else later. The picture shows a skirt, which I am still wearing but have decided to cut the beads off the front of the waistband, mainly because they cannot be seen when wearing a top and also they are beginning to become loose anyway. You will have to click onto the picture to enlarge it to see the tiny little things. I've used the beads for this very pretty little heart which is one of my sister's patterns. The metal insert I purchased in Hong Kong, many, many years ago when I lived there, but may be that's called hoarding, not recycling! The metal insert is not exactly the same as it doesn't have so many holes in it, but nevertheless it seems to work.
I do like following Jane's patterns, suppose I've grown up with them! This particular pattern is very clever especially the way the beads are added, its the first time I've worked this heart so even more thrilled that it turned out so well.
The flip-flops as you can see have begun to deposit little clumps of beads around the house, so they are also being cut off and used on other tatting projects.
Posted by Sally Kerson at Tuesday, June 30, 2009