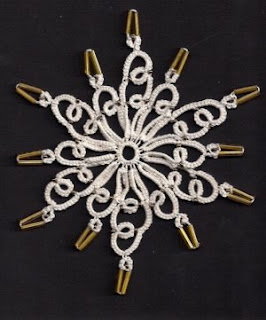 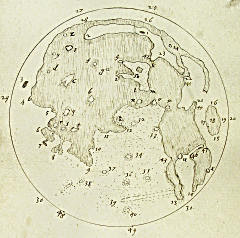 Well I just had to complete the trio by tatting a star, especially after such an eventful week for those who are interested in the sky above. It has been said that counting all the stars in the Universe would be like trying to count all the grains of sand on all the beaches in the world, an impossible task. Instead scientists can only estimate how many stars there are in a galaxy. Apparently most of the stars we see in the sky are 250 light years away, I can tell you that this star felt like it was going to take me light years to make, and it travelled 250 land miles or more in the attempt! But thats another story.
This year the world celebrates the International Year of Astronomy, marking the 400th anniversary of the first drawings of celestial objects through a telescope. This first has long been attributed to Galileo Galilei, the Italian who went on to play a leading role in the 17th century scientific revolution. But astronomers and historians in the UK are keen to promote a lesser-known figure, English polymath Thomas Harriot, who made the first drawing of the Moon through a telescope several months earlier in July 1609. Above is one of his drawings, yesterday 26th July he was remembered for this achievement. But in England the sky last night was covered in dark clouds and rain so no stars could be seen, not even the moon and we are still awaiting the sun!
Twinkle, twinkle little star,
How I wonder what you are.
Up above the world so high,
Like a diamond in the sky.
Twinkle, twinkle, little star,
How I wonder what you are.
Posted by Sally Kerson at Monday, July 27, 2009