Him in the Garage!

It is the eve of Chinese New Year so thought you might like to see the Christmas present my son who lives in Singapore, gave "him in the garage". This sign is now stuck on the door of the garage which leads from the hall way of our house and it is where the shuttle making takes place. 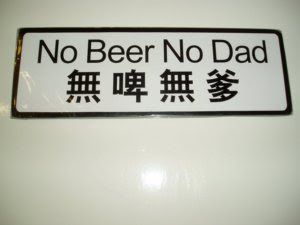 And the bottle opener which was also in the Christmas parcel 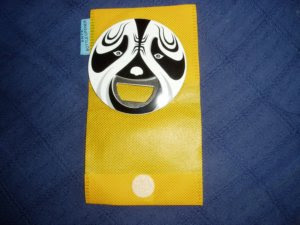 Here are the wood blanks ready to be shaped into shuttles, note the ebony on the right of the picture, which arrived by post this week. 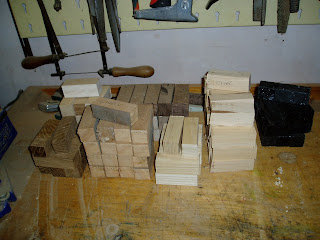 Last Saturday morning you would have seen me walking through the streets of our nearest town carrying an adult beaver costume in one hand and a parcel containing tatting shuttles in the other, as I made my way to the main Post Office. If I had been wearing the beaver costume people would have probably noticed me! Instead as I queued in the Post Office, I looked like any other person on a busy Saturday morning. After a little while I was directed to a counter by a number and handed the precious little parcel to the woman working there. She did ask me if there was anything valuable inside, anything valuable?! Of course there was, but she hardly wanted to hear that it contained tatting shuttles, she probably didn’t know what a tatting shuttle was. I said farewell to the shuttles and wished them a safe journey from the South to the Middle of England and they duly arrived at my sister’s house on Monday morning. In the afternoon she started to sell them and now they are all gone, it was amazing how quickly they sold and some are probably still flying around the world somewhere!
Hopefully, there will be quite a few shuttles ready by next weekend when we plan to take ourselves and the shuttles by car to the Midlands.

(In case you are curious to why I was carrying an adult beaver costume, well I was on my way to a Scout meeting - will show you pictures of the costume at a later date - but not with me wearing it!)
Posted by Sally Kerson at Saturday, February 13, 2010