For those of you who have visited Trayna's blog you will have seen the shuttle she has just purchased and have read all about the particular wood.   Trayna lives in the far north whilst we are down in the south of the country. There is very little of this wood so, as and when, a few shuttles will be put into Jane's shop.   This one was made for me and the markings obviously differ from shuttle to shuttle.  It had a little trip outside to bask in the Winter snow! 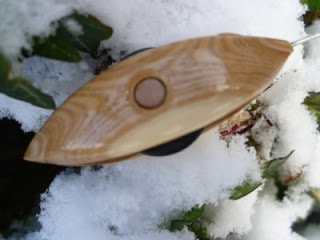 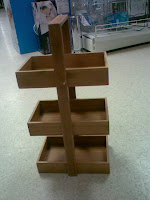 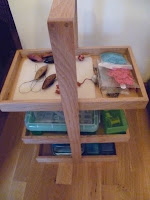 As you should all know by now  'Im in the garage' is my other half, whose workshop is in the garage.
Before Christmas my youngest son visited us and asked for something to be made, previous to that I had requested a set of tatting trays.  So there was a lot of friendly banter on whose woodworking project should take priority. My request was this set of trays, the idea came whilst visiting a shop and I took a photo of them on the left, it was being sold in the bathroom and bedroom department of the store.  It seemed a good idea to put tatting objects on and be able to carry it around the house without loosing things on the way.  So my request is what you see on the right, the trays are not so deep, and a little wider, as I didn't want to clutter them up with unnecessary objects. Unfortunately the photograph doesn't do it justice (it is the angle I have taken it) as it appears to have different sized trays whereas they are all the same size, with the bottom one being slightly deeper.  It is tall enough to have by a chair and work from.  I have only just started using it, that is why it looks tidy. I'm not quite sure what I want to keep on it but hope to mainly use it for current projects instead of having them spread everywhere, whilst the rest of the thread, shuttles beads etc live in another place.

My son also got his wish and this was made for his Christmas present.  It is not a game, but for storage of particular items, I wonder if you can guess?  The inlay is ebony and holly wood which comes from his late grandfathers' garden.   Due to his car and himself being poorly we were unable to see him over Christmas and  so what you see below is still wrapped up in Christmas paper.  He is off to Mexico tomorrow for a holiday so not sure when it will be in his possession.  So much for the priority of it being made! 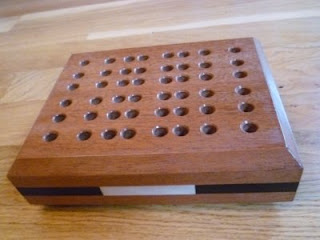 With all these projects there has not been much time to make shuttles, but a few will be heading towards Janes' home soon.  Will keep you up-to-date with their journey.
Posted by Sally Kerson at Wednesday, December 29, 2010