One of the delights of having a blog is being able to share patterns with others, and thank you to all who do post such wonderful patterns, there are so many talented people who are generous in this respect.  I have only put very few on my blog over the past year and have never seen any of them actually tatted by someone else.  This could be because my instructions are difficult to understand, which rather scares me, I wouldn't want that to happen. Or of course no one has got around to making them yet, which is very understandable as there are so many other much better patterns out there to choose from. Snow and ice slowed things up here in England over the past two days, which meant that as I couldn't get the car out so the funeral director had to pick me up and take me to the crematorium to conduct a funeral service yesterday.  I didn't want to risk having an accident and not getting there on time, or not at all.    So when I arrived home I was able to spend a fruitful half hour or so looking at the blogs and went to Gina's blog and found this snowflake, and then popped across to Spulni-Blog
I was so impressed with the design and then when Gina added beads, well I decided to add more, especially since receiving 20 packets in the post!  Also I changed it very slightly.
But is that right should we do this to people's designs?  It feels like we are being critical, or it could be classed as imagination? 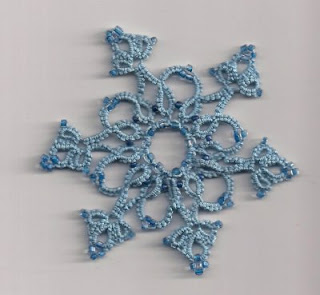 The blue snowflake was my first attempt but it was a bit squashed in the middle.
Thank you to Orsi and Gina.
Posted by Sally Kerson at Saturday, December 04, 2010