We all love surprises, especially the ones that come in boxes or packets.  These were in a bulging package that Sue Anna sent me, she has spoilt my big sister Jane as well and we are both thrilled to bits.  Sue Anna heard of the trouble we have had importing goods from the USA because the nasty customs people get to them first!   And so she came to our rescue.  There are some amazing colours, certainly a reminder that Summer is coming and just look at those HDTs from Yarnplayer.  She also included bobbins they are so so useful.  Thank you again Sue Anna 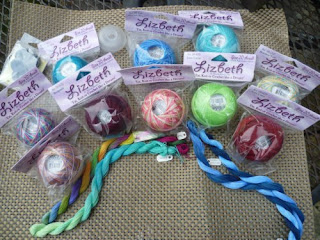 When my boys were young and they were given Christmas or Birthday presents they usually were more interested in the boxes that the toys came in rather than the actual toys themselves.  My son (the one who lives in England) always gives me surprise gifts in beautiful boxes, and then tells me off for liking the box more than the gift. I of course remind him that he used to be exactly the same! Some years ago he gave me this box filled with very luxurious bath and shower gel. Although this one isn't as pretty as the boxes he now gives me with gifts inside, I kept this because it was so strong. 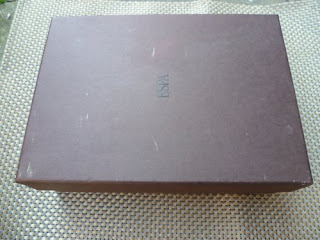 It was transformed over the weekend to look like this. 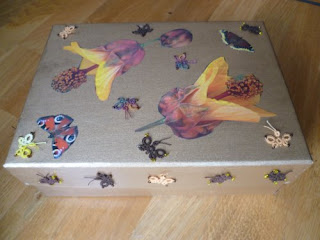 The flowers are Abutilon (Chinese Lanterns) and by complete coincidence I noticed that Wendy has posted on her blog a picture of the same flower only it doesn't seem to be published properly at the moment, hopefully it will later on today.
Next time I hope to show you the latest cuff links that 'Im in the garage' has made, don't worry shuttles are also still being produced.
Posted by Sally Kerson at Tuesday, March 22, 2011