At the moment I have five craft projects on the go and this is causing, apart from a lot of mess, a fair amount of my time tied up with trying to get them completed for certain deadlines, although most are for July. Apart from tatting I am making something out of crochet which I will blog about soon.  So I really don't know why I decided to make this frog, but it might just come in useful to compliment one of the projects. 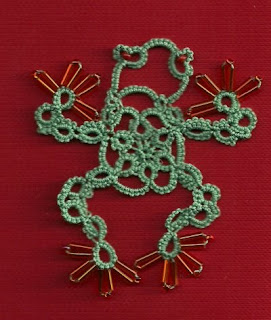 After I had made it I was clearing some stuff in the garden and this little fellow appeared. He immediately made a jump for the undergrowth and then when I tried to take another photograph he jumped again and I dropped the camera as I was so close to him and he frightened me! 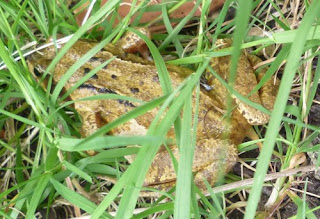 The pattern for the Red Eyed Tree frog (not found in English gardens!) is Janes and you can find it here