I managed to finish this necklace last night even though it was started many weeks ago, only because I wanted to wear it today. The buttons are larger than the ones in the original button pattern so there was some adjustment and also larger beads were used on parts of it.

Purple is the liturgical colour of Lent, but it is a colour I wear a lot of so rather like the season in that respect.   I have given up chocolate for Lent and taken on writing a series of talks about the Book of Proverbs, and don't really know which is the hardest as they are both very challenging. 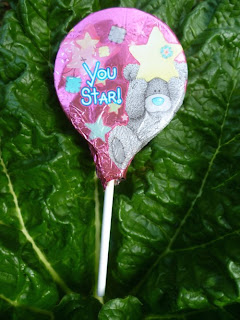 But I have resisted this chocolate lollipop given to me by my son as a reward for being good at the dentist after root canal treatment, he has got a very good sense of humour.   It is resting on some rhubarb leaves which are really doing well now that we are having a bit of sunshine for a change.

Now that it is warmer trying to encourage 'Im in the garage' to stay in there longer!