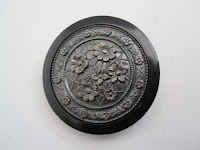 I've alway been fascinated by buttons and continue to be, these came out of the tins I was given here and I've been meaning to show you them for ages. I've no idea what to use them for as some of them are a quite large and bulky, they are also in many respects unusual. I can't use them for holding earrings as Gina suggests because I don't have pierced ears.
The two large black ones may be useful as a brooches though. 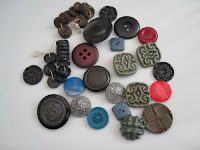 Sadly there hasn't been much time for tatting over the last few days, and spending the evening stuck in the office with a computer, a former Vicar of the Parish, and his Curate trying to sort out computer problems, wasn't fun. No honestly it wasn't! Especially as this morning the new printer decided that it wouldn't print a thing! Most unhelpful when I needed to get a weekly church information news sheet out to the four churches, so it meant going home and starting again on my own PC. The result is far from satisfactory and I've wasted hours of tatting time! Sometimes I hate technology, give me a shuttle any day!!
Posted by Sally Kerson at Saturday, July 11, 2009