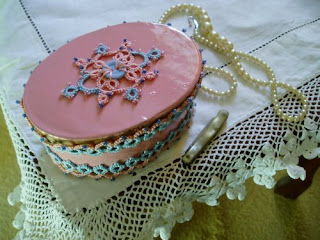 A week today will mark my 1st blog-anniversary, nothing to shout about really, but I would just like to say that it has been great meeting (well not in the flesh!) the world wide tatting community. However, I don’t plan to have a “Giveaway” in celebration as I would rather save that until my 100th post which could be in a few months time, depending on how quick or slow I become in blogging!

In preparation for the event I decided to buy some boxes, paint them and decorate them, what they are going to contain is a secret at the moment. This pink box is my first attempt; it reminds me of an iced cake!


Following on from the various bits and pieces, seven in all, that make up the Pop-A-bobbin shuttle I would like to talk briefly about the
INFORMATION CARD AND THE PACKET/SLEEVE.

A member of our congregation, a retired printer, made the information card for me and unlike you and I he doesn’t collect thread he collects card! Unfortunately he hasn’t had a good year in many respects, his health hasn’t been good and his son died in February. But he is always cheerful and has been very helpful with the printing of these cards. 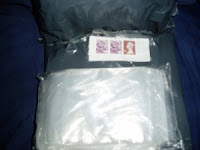 The first plastic sleeves I purchased from a car boot sale, not knowing at the time what to use them for. Since the cards were made for this size I needed to purchase some more and so went of course to e.bay and bought not 100 not 200 but 1,000! Well I figured that they would always come in useful! 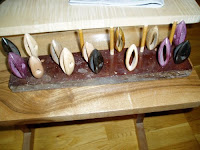 THE LAST OF THE SEVEN is of course the SHUTTLE itself and what more can I say about them? Here are a few at the varnishing stage. Jane is due to get another consignment next week from "I'm in the Garage" The waiting list is growing and we have some more ebony arriving by post tomorrow.