My first tatting shuttle was a post shuttle, I can remember it was blue, a pretty shade of blue but I have no idea what became of it. I learnt to tat as a young child so it probably got lost in one of my many moves. The next shuttle I owned was a Milward's shuttle which I still have, although minus the hook that originally came with it. So it was strange when I started to test tat these new additions which "I'm in the garage" has now added to his range of handmade wooden shuttles - there was a feeling of déjà vu! 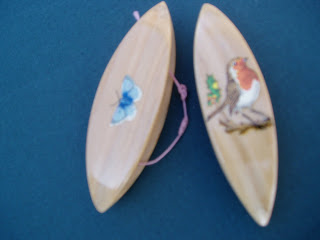 We are planning on selling the post shuttles (via Jane) before you ask! There will be a "Shuttle management" meeting at the weekend to discuss prices and some better photographs will be taken. The two you see in the pictures are made out of cedar and then transfers were put on them, each picture shows one side of the shuttle. We have only managed to find transfers of birds and butterflies that will fit on the shuttles so far. Small transfers are difficult to find, nowadays it’s the peel off stickers which are popular but they are often too thick for this kind of work. 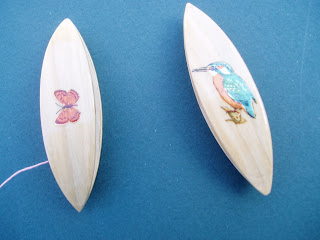 Krystle offered me some wood a few weeks back and was so kind to take the trouble and post this box to me, and she has also requested some shuttles to be made out of a piece. I am also sending her the first of the post shuttles, which includes a very special shuttle for her eldest daughter, I will let her show you it to you when it arrives. For the past week all the air mail has been held up due to the volcano dust from Iceland grounding the aircraft which were either due to take off or arrive in the UK, thankfully today the airports are now open and operating again but it has meant thousands of people have been stranded all over the world. 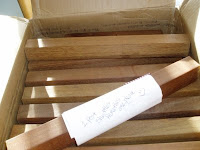 The "Pop-A-bobbin" shuttles are continuing to be made but we are awaiting a consignment of bobbins which have obviously been held up because of the volcanic dust.
Posted by Sally Kerson at Wednesday, April 21, 2010